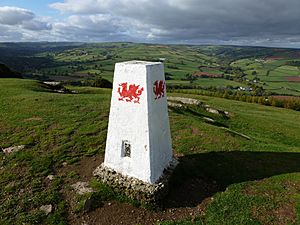 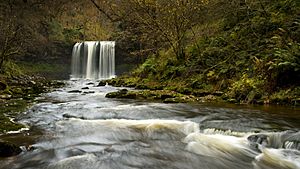 Sgwd yr Eira, on the Afon Hepste near Ystradfellte

The Brecon Beacons National Park was established in 1957, the third of the three Welsh parks after Snowdonia in 1951 and the Pembrokeshire Coast in 1952. It stretches from Llandeilo in the west to Hay-on-Wye in the northeast and Pontypool in the southeast, covering 519 square miles (1,340 km2) and encompassing four main regions – the Black Mountain in the west, reaching 802 metres (2631 feet) at Fan Brycheiniog, Fforest Fawr and the Brecon Beacons in the centre, including the highest summit in the park and in South Wales at Pen y Fan 886 metres (2,907 feet) and the confusingly named Black Mountains in the east, where the highest point is Waun Fach 811 metres (2,661 feet). The western half gained European and global status in 2005 as Fforest Fawr Geopark. This includes the Black Mountain, the historic extent of Fforest Fawr, and much of the Brecon Beacons and surrounding lowlands.

The Black Mountains in the east are clearly separated from the central Beacons by the Usk valley between Brecon and Abergavenny. The other three regions form a continuous massif of high ground above 300 metres (1000'), and the divisions are less clear; the A470 road forms the approximate boundary between the central Beacons and Fforest Fawr, while a minor road from Sennybridge to Ystradgynlais divides Fforest Fawr from the Black Mountain range to the west.

The entire national park achieved the status of being an International Dark Sky Reserve in February 2013.

Most of the national park is bare, grassy moorland grazed by Welsh mountain ponies and Welsh mountain sheep, with scattered forestry plantations, and pasture in the valleys. It is known for its remote reservoirs, waterfalls including the 90-foot (27 m) Henrhyd Waterfall and the falls at Ystradfellte, and its caves, such as Ogof Ffynnon Ddu. The Brecon Beacons Mountain Centre was opened in 1966 to help visitors understand and enjoy the area. Ravens, peregrine falcons, wheatears, ring ouzels, and the rare merlin breeds in the park. The red kite can also be spotted.

Due to the relative remoteness and harsh weather of some of its uplands, the park is used for military training. UK Special Forces, including the SAS and SBS hold demanding selection training exercises here, such as an exercise called the Fan dance. The infantry regiments of the British Army train at Sennybridge, where NCO selection also takes place.

In 2006 and 2007, controversy surrounded the government decision to build the South Wales Gas Pipeline through the park, the National Park Authority calling the decision a "huge blow".

The Brecon Beacons National Park Authority is a special purpose local authority with wide-ranging responsibilities for the conservation and enhancement of the landscape and the promotion of its enjoyment by the public, and in particular exercises planning functions across the designated area of the park. The park extends across the southern part of Powys, the northwestern part of Monmouthshire and parts of eastern Carmarthenshire. It also includes the northernmost portions of several of the unitary authority areas which are centred on the coalfield communities to the south and including the county boroughs of Neath Port Talbot, Rhondda Cynon Taf, Merthyr Tydfil and Blaenau Gwent together with very small parts of Caerphilly and Torfaen.

Outdoor activities in the park include walking, cycling, mountain biking, horse riding, as well as sailing, windsurfing, canoeing and fishing, rock climbing, hang-gliding, caravanning, camping and caving. A long-distance cycling route, the Taff Trail, passes over the Beacons on its way from Brecon to Cardiff, and in 2005 the first walk to span the entire length of the Brecon Beacons National Park was opened. The 100-mile (161 km) route, called the Beacons Way, runs from Abergavenny via Ysgyryd Fawr in the east and ends in the village of Llangadog in Carmarthenshire in the west.

A railway with narrow gauge trains run by the Brecon Mountain Railway.

All content from Kiddle encyclopedia articles (including the article images and facts) can be freely used under Attribution-ShareAlike license, unless stated otherwise. Cite this article:
Brecon Beacons National Park Facts for Kids. Kiddle Encyclopedia.