The Brecon Beacons Mountain Centre is the popular name for the National Park Visitor Centre managed by the Brecon Beacons National Park Authority. It is also known simply as the Mountain Centre, and also as the Libanus Visitor Centre. It is situated near the village of Libanus some 8 km / 5 mi south-west of Brecon in the county of Powys, south Wales. The Centre provides information and interpretation for visitors to the area. 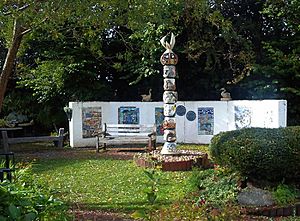 Admission to the centre itself is free. There is a pay and display car park. A shop sells maps and guides and items of walking equipment. A cafeteria provides food and drinks throughout the year. The Centre hosts a variety of events, including guided walks, some of which explore the common of Mynydd Illtud beside which the Centre is situated. From the grounds and in particular from the terrace there are good views of the two highest peaks in the Brecon Beacons, Pen y Fan and Corn Du.

A grassed area in front of the building is available for children to play games and for picknicking.

All content from Kiddle encyclopedia articles (including the article images and facts) can be freely used under Attribution-ShareAlike license, unless stated otherwise. Cite this article:
Brecon Beacons Mountain Centre Facts for Kids. Kiddle Encyclopedia.