The Brecon Beacons (Welsh: Bannau Brycheiniog) are a mountain range in South Wales. In a narrow sense, the name refers to the range of Old Red Sandstone peaks which lie to the south of Brecon. Sometimes referred to as "the central Beacons" they include South Wales' highest mountain, Pen y Fan. The range forms the central section of the Brecon Beacons National Park (Parc Cenedlaethol Bannau Brycheiniog), a designation which also encompasses ranges both to the east and the west of "the central Beacons". This much wider area is also commonly referred to as "the Brecon Beacons", and it includes the Black Mountains to the east as well as the similarly named but quite distinct Black Mountain to the west. The highest peaks include Fan Brycheiniog to the west and Pen y Fan in the central part. They share the same basic geology as the central range, and so exhibit many similar features, such as the north-facing escarpment and glacial features such as lakes and cwms (cirques)

The Brecon Beacons, seen from the south 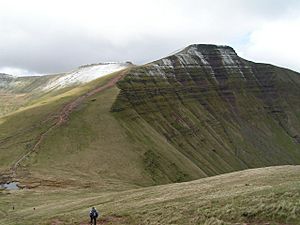 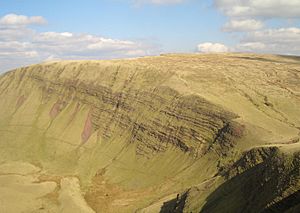 Fan Brycheiniog, the highest peak on the Black Mountain

The Brecon Beacons are said to be named after the ancient practice of lighting signal fires (beacons) on mountains to warn of attacks by invaders.

The round of the Taf Fechan skyline forms a ridge walk commonly known as the Beacons Horseshoe.

The mountains are formed from Old Red Sandstone which dates from the late Silurian and Devonian times.

The area was inhabited during the Neolithic and the succeeding Bronze Age, the most obvious legacy of the latter being the numerous burial cairns which adorn the hills of the centre and west of the National Park. There are especially good examples of round barrows on Fan Brycheiniog, Pen y Fan and Corn Du. The former was excavated in 2002–4 and the ashes in the central cist dated to about 2000 BCE using radiocarbon dating. A wreath of meadowsweet was likely placed in the burial.

Over twenty hillforts were established in the area during the Iron Age. The largest, and indeed the largest in South Wales, were the pair of forts atop y Garn Goch near Bethlehem, Carmarthenshire – y Gaer Fawr and y Gaer Fach – literally "the big fort" and "the little fort". The forts are thought to have once been trading and political centres.

When the Romans came to Wales in 43 CE, they stationed more than 600 soldiers in the area. Y Gaer, near the town of Brecon was their main base. During the Norman Conquest many castles were erected throughout the park. One of the most famous is Carreg Cennen Castle but there are many more. Brecon Castle is of Norman origin.

There are many old tracks which were used over the centuries by drovers to take their cattle and geese to market in England. The drovers brought back gorse seed, which they sowed to provide food for their sheep.

The area played a significant role during the Industrial Revolution as various raw materials including limestone, silica sand and ironstone were quarried for transport southwards to the furnaces of the industrialising South Wales Valleys. 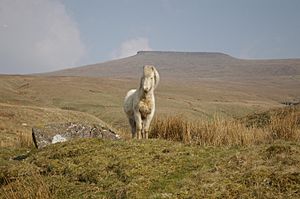 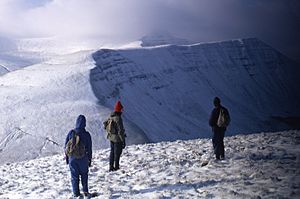 The Beacons in winter

Mountain rescue in south Wales is provided by five volunteer groups, with the police having overall command. In serious situations they are aided by RAF helicopters from RAF Chivenor or RAF Valley. The five groups are:

The groups are funded primarily by donations. Their work is not restricted to mountain rescue – they frequently assist the police in their search for missing or vulnerable people in the community.

View north into Cwm Llwch from Corn Du, in the Brecon Beacons range

The Brecon Beacons are used for training members of the UK armed forces and military reservists. The Army’s Infantry Battle School is located at Brecon, and the Special Air Service (SAS) use the area to test the fitness of applicants. In July 2013 three soldiers died from overheating or heatstroke on an SAS selection exercise. An army captain had been found dead on Corn Du earlier in the year after training in freezing weather for the SAS.

All content from Kiddle encyclopedia articles (including the article images and facts) can be freely used under Attribution-ShareAlike license, unless stated otherwise. Cite this article:
Brecon Beacons Facts for Kids. Kiddle Encyclopedia.