Kids Encyclopedia Facts
Not to be confused with Dinas Powys hillfort. 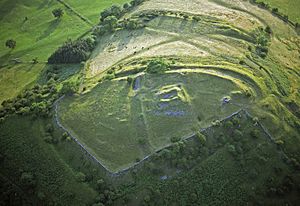 Castell Dinas is a hillfort and castle in southern Powys, Wales. At 450 m (1,476 feet) (SO179301) it has the highest castle in England and Wales. It is positioned to defend the Rhiangoll pass between Talgarth and Crickhowell.

This site was originally an Iron Age, 600 BC to 50 AD, hillfort. A fortified Norman castle with stone walls was built on the site possibly by William Fitz Osbern or his son Roger de Breteuil, Earl of Hereford in the period 1070 to 1075. The castle was eclipsed with the building of Brecon castle before April 1093. The fortress seems to have been constructed in stone from the first with a hall-keep surrounded with curtain walls and square towers. Historically the castle remained a part of Brecon or Brycheiniog barony until 1207 when King John of England granted it to Peter FitzHerbert. It then became caput of what was to become the Talgarth or Blaenllyfni barony.

What remains now are crumbling walls mainly covered with earth and the outlines of ditches and ramparts from the original Iron Age fortifications, commanding extensive views up into the Black Mountains and over Talgarth towards Brecon.

All content from Kiddle encyclopedia articles (including the article images and facts) can be freely used under Attribution-ShareAlike license, unless stated otherwise. Cite this article:
Castell Dinas Facts for Kids. Kiddle Encyclopedia.