Richard Hakluyt (pronounced /ˈhæklʊt/, /ˈhæklət/, or) (c. 1552 or 1553 – 23 November 1616) was an English writer. He is famous for his efforts in promoting the settlement of North America by the English through his works. His most important books are Divers Voyages Touching the Discoverie of America (1582) and The Principal Navigations, Voiages, Traffiques and Discoueries of the English Nation (1598–1600). 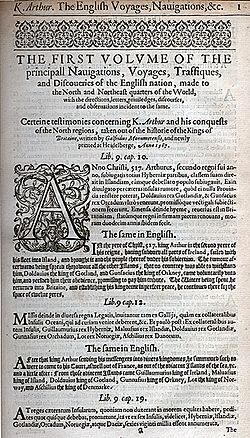 The first page of volume 1 of the expanded edition of Hakluyt's The Principal Navigations, Voiages, Traffiques and Discoueries of the English Nation (1598)

All content from Kiddle encyclopedia articles (including the article images and facts) can be freely used under Attribution-ShareAlike license, unless stated otherwise. Cite this article:
Richard Hakluyt Facts for Kids. Kiddle Encyclopedia.