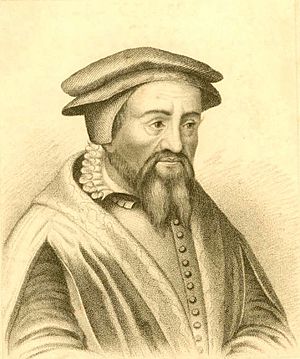 Peter Martyr d'Anghiera (2 February 1457 – October 1526) was an Italian-born historian of Spain and of the discoveries and explorations in the Americas.

The international form of his name is Pietro Martire d'Anghiera. In different languages, his name is written:

He was born on February 2, 1457 at Arona, near Anghiera (called now Angera) on Lake Maggiore, Lombardy, Italy. He went to Rome in 1477, at the age of twenty, and there he met important persons of the Catholic Church. In 1486, Anghiera met the Spanish ambassador in Rome, and with him to Spain in August, 1487, to the court of Ferdinand II of Aragon and Isabella of Castile.

He was the first writer to use the word Hispaniola to name the island that Columbus named La Española. He also wrote that the Taíno name of the island was Quizqueia, a name that no other historian of that time mentioned. Quizqueia is used now as Quisqueya or Kiskeya for the whole island (in Haiti) or for the eastern part (in the Dominican Republic).

All content from Kiddle encyclopedia articles (including the article images and facts) can be freely used under Attribution-ShareAlike license, unless stated otherwise. Cite this article:
Peter Martyr d'Anghiera Facts for Kids. Kiddle Encyclopedia.