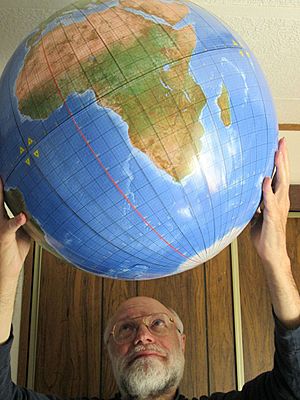 A globe shows details of its subject. A terrestrial globe shows land masses and water bodies. It might show nations and prominent cities and the network of latitude and longitude lines. Some have raised relief to show mountains. A celestial globe shows stars, and may also show positions of other prominent astronomical objects. Typically it will also divide the celestial sphere up into constellations.

The word "globe" comes from the Latin word globus, meaning "sphere". Globes have a long history. The first known mention of a globe is from Strabo, describing the Globe of Crates from about 150 BC. The oldest surviving terrestrial globe is the Erdapfel, wrought by Martin Behaim in 1492. The oldest surviving celestial globe sits atop the Farnese Atlas, carved in the 2nd century Roman Empire. 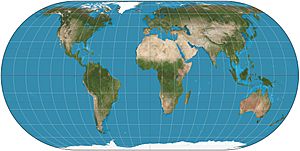 Flat maps are created using a map projection that inevitably introduces an increasing amount of distortion the larger the area that the map shows. A globe is the only representation of the Earth that does not distort either the shape or the size of large features – land masses, bodies of water, etc.

Sometimes a globe has surface texture showing topography; in these, elevations are exaggerated, otherwise they would be hardly visible. Most modern globes are also imprinted with parallels and meridians, so that one can tell the approximate coordinates of a specific place. Globes may also show the boundaries of countries and their names, a feature that can quickly become out of date, as countries change their name or borders.

Many terrestrial globes have one celestial feature marked on them: a diagram called the analemma, which shows the apparent motion of the Sun in the sky during a year.

Globes generally show north at the top, but many globes allow the axis to be swiveled so that southern portions can be viewed conveniently. This capability also permits exploring the earth from different orientations to help counter the north-up bias caused by conventional map presentation. 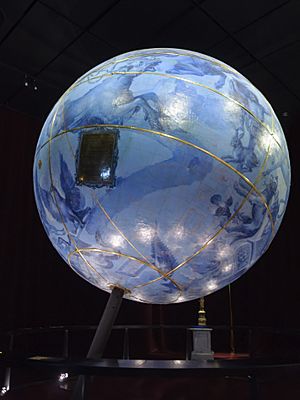 Celestial globe made by Coronelli for Louis XIV c.1683 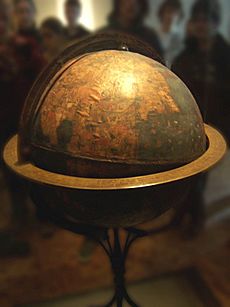 The "Erdapfel" of Martin Beheim is the oldest surviving terrestrial globe, made between 1491 and 1493; the Americas are not yet included. Germanisches Nationalmuseum, Nuremberg (2006)

The sphericity of the Earth was established by Greek astronomy in the 3rd century BC, and the earliest terrestrial globe appeared from that period. The earliest known example is the one constructed by Crates of Mallus in Cilicia (now Çukurova in modern-day Turkey), in the mid-2nd century BC.

No terrestrial globes from Antiquity or the Middle Ages have survived. An example of a surviving celestial globe is part of a Hellenistic sculpture, called the Farnese Atlas, surviving in a 2nd-century AD Roman copy in the Naples Archaeological Museum, Italy.

Early terrestrial globes depicting the entirety of the Old World were constructed in the Islamic world. According to David Woodward, one such example was the terrestrial globe introduced to Beijing by the Persian astronomer, Jamal ad-Din, in 1267.

The earliest extant terrestrial globe was made in 1492 by Martin Behaim (1459–1537) with help from the painter Georg Glockendon. Behaim was a German mapmaker, navigator, and merchant. Working in Nuremberg, Germany, he called his globe the "Nürnberg Terrestrial Globe." It is now known as the Erdapfel. Before constructing the globe, Behaim had traveled extensively. He sojourned in Lisbon from 1480, developing commercial interests and mingling with explorers and scientists. In 1485–1486, he sailed with Portuguese explorer Diogo Cão to the coast of West Africa. He began to construct his globe after his return to Nürnberg in 1490.

Another early globe, the Hunt–Lenox Globe, ca. 1510, is thought to be the source of the phrase Hic Sunt Dracones, or “Here be dragons”. A similar grapefruit-sized globe made from two halves of an ostrich egg was found in 2012 and is believed to date from 1504. It may be the oldest globe to show the New World. Stefaan Missine, who analyzed the globe for the Washington Map Society journal Portolan, said it was “part of an important European collection for decades.” After a year of research in which he consulted many experts, Missine concluded the Hunt–Lenox Globe was a copper cast of the egg globe.

A facsimile globe showing America was made by Martin Waldseemueller in 1507. Another “remarkably modern-looking” terrestrial globe of the Earth was constructed by Taqi al-Din at the Istanbul observatory of Taqi al-Din during the 1570s.

The world’s first seamless celestial globe was built by Mughal scientists under the patronage of Jahangir.

Globus IMP, electro-mechanical devices including five-inch globes have been used in Soviet and Russian spacecraft from 1961 to 2002 as navigation instruments. In 2001, the TMA version of the Soyuz spacecraft replaced this instrument with a virtual globe.

In the 1800s small pocket globes (less than 3 inches) were status symbols for gentlemen and educational toys for rich children.

Traditionally, globes were manufactured by gluing a printed paper map onto a sphere, often made from wood.

The most common type has long, thin gores (strips) of paper that narrow to a point at the poles, small disks cover over the inevitable irregularities at these points. The more gores there are, the less stretching and crumpling is required to make the paper map fit the sphere.

Modern globes are often made from thermoplastic. Flat, plastic disks are printed with a distorted map of one of the Earth's Hemispheres. This is placed in a machine which molds the disk into a hemispherical shape. The hemisphere is united with its opposite counterpart to form a complete globe.

Usually a globe is mounted so that its spin axis is 23.5° from vertical, which is the angle the Earth's spin axis deviates from perpendicular to the plane of its orbit. This mounting makes it easy to visualize how seasons change. 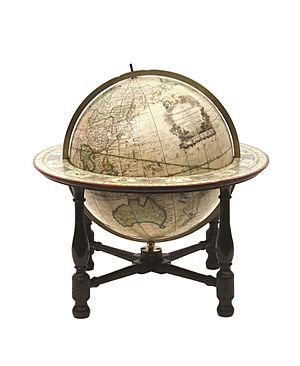 A terrestrial globe on which the tracts and discoveries are laid down from the accurate observations made by Capts Cook, Furneux, Phipps, published 1782 / globe by John Newton ; cartography by William Palmer, held by the State Library of New South Wales

All content from Kiddle encyclopedia articles (including the article images and facts) can be freely used under Attribution-ShareAlike license, unless stated otherwise. Cite this article:
Globe Facts for Kids. Kiddle Encyclopedia.