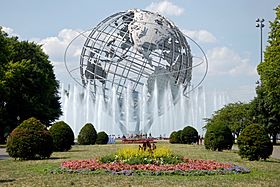 The Unisphere is a 140-feet high stainless steel globe in Queens, New York. It is in Flushing Meadows-Corona Park. It was designed by landscape architect Gilmore D. Clarke. It is a symbol of the borough of Queens.

The Unisphere was built to celebrate the beginning of the space age. It was introduced at the 1964-1965 New York World's Fair. It represented the theme of countries around the world depending on each other. It was dedicated to "Man's Achievements on a Shrinking Globe in an Expanding Universe".

All content from Kiddle encyclopedia articles (including the article images and facts) can be freely used under Attribution-ShareAlike license, unless stated otherwise. Cite this article:
Unisphere Facts for Kids. Kiddle Encyclopedia.