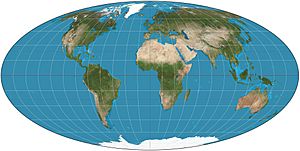 Carl Friedrich Gauss showed that is not possible to project the surface of a sphere to a plane, without distorting it. This theorem is known as Theorema egregium today.

Many properties can be measured on the Earth's surface independent of its geography. Some of these properties are:

Map projections can be constructed to preserve at least one of these properties, though only in a limited way for most. Each projection preserves, compromises, or approximates basic metric properties in different ways. The purpose of the map determines which projection should form the base for the map. Because many purposes exist for maps, a diversity of projections have been created to suit those purposes.

All content from Kiddle encyclopedia articles (including the article images and facts) can be freely used under Attribution-ShareAlike license, unless stated otherwise. Cite this article:
Map projection Facts for Kids. Kiddle Encyclopedia.