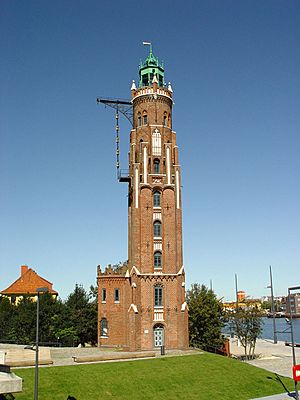 Lighthouses, such as this one in Bremerhaven can be used for reference. 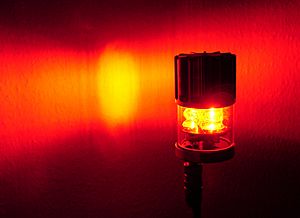 close up of a signal (for an obstacle), used in aviation

In navigation, the word bearing is used for different methods that try to find out the angle between an object used for this purpose, and a reference direction. There are different systems of reference, that can be used for this. A system of reference that is commonly used is that of Cardinal directions, as they can be found with a compass. Very often, points that can easily be determined, and that move very little are taken as reference. Such points include stars, mountains, the sun, and beacons. Beacons come in the form of lighthouses on the coast, but also as electric beacons or other sea marks on the open sea.

The bearing can be differentiated: Optical bearings rely on visual information, other systems rely on radar for example.

All content from Kiddle encyclopedia articles (including the article images and facts) can be freely used under Attribution-ShareAlike license, unless stated otherwise. Cite this article:
Bearing (navigation) Facts for Kids. Kiddle Encyclopedia.