Inside Out is a 2015 American computer-animated comedy film produced by Pixar Animation Studios and distributed by Walt Disney Studios Motion Pictures. Directed by Pete Docter and co-directed by Ronnie del Carmen, with a screenplay written by Docter, Meg LeFauve, and Josh Cooley, adapted from a story by Docter and del Carmen, it stars the voices of Amy Poehler, Phyllis Smith, Richard Kind, Lewis Black, Bill Hader, Mindy Kaling, Kaitlyn Dias, Diane Lane, and Kyle MacLachlan. The film is set in the mind of a young girl named Riley, where five personified emotions—Joy, Sadness, Anger, Fear, and Disgust—try to lead her through life as she and her parents adjust to their new surroundings after moving from Minnesota to San Francisco.

Docter first began developing Inside Out, after noticing changes in his daughter's personality as she grew older, with Del Carmen subsequently became co-director after working on the animated film Up (2009). The film's producers consulted numerous psychologists including Dacher Keltner from the University of California, Berkeley, who helped revise the story by emphasizing the neuropsychological findings that human emotions affect interpersonal relationships and can be significantly moderated by them. The film was first announced in 2011 and the official title was revealed in 2013, with Poehler, Black, Kaling, Hader, and Smith were subsequently announced as the cast that same year.

Inside Out premiered at the 68th Cannes Film Festival on May 18, 2015, and was released in the United States on June 19, accompanied by the short film Lava. It was praised by critics for its concept, screenplay, subject matter, Michael Giacchino's musical score, and the vocal performances (particularly those of Poehler, Smith, Black, and Kind). The film grossed $857 million worldwide, making it the seventh-highest-grossing film of 2015, and received numerous accolades, including a BAFTA Award, Golden Globe Award, Critics' Choice Award, Annie Award, Satellite Award, and Academy Award for Best Animated Feature.

Within the mind of a girl named Riley are the basic emotions that control her actions—Joy, Sadness, Fear, Disgust, and Anger. Her experiences become memories, stored as colored orbs, which are sent into long-term memory each night. Her five most important "core memories" power aspects of her personality which take the form of floating islands. Joy acts as the leader, and she and the rest of the emotions try to limit Sadness's influence.

At the age of 11, Riley moves to San Francisco for her father's new job. She at first has poor experiences; the new house is cramped and old, her father hardly has any time for her, a local pizza parlor only serves pizza topped with broccoli, and the moving van with their belongings ends up in Texas and will not arrive for weeks. On Riley's first day at her new school, Sadness retroactively turns joyous memories sad, which causes Riley to cry in front of her class and creates a sad core memory. Joy tries to dispose of it by using a vacuum tube but accidentally knocks the other core memories loose during a struggle with Sadness, disabling the personality islands. Joy, Sadness, and the core memories are sucked out of the Headquarters.

In Joy and Sadness's absence, Anger, Fear, and Disgust are left in control, with disastrous results, distancing Riley from her parents, friends, and hobbies. Because of this, her personality islands gradually crumble and fall into the "Memory Dump", where memories are forgotten. Finally, Anger inserts an idea into the console, prompting Riley to run away to Minnesota, believing it will restore her happiness.

While navigating the vast long-term memory area, Joy and Sadness encounter Bing Bong, Riley's childhood imaginary friend, who suggests riding the "train of thought" back to Headquarters. The three, after extreme inconvenience caused by the islands' dissolution, eventually catch the train but it halts when Riley falls asleep, then derails entirely with the collapse of another island. In desperation, Joy abandons Sadness and tries to ride a "recall tube" back to the Headquarters but the ground below the tube collapses, breaking and sending Joy and Bing Bong plunging into the Memory Dump. A crestfallen Joy discovers a sad memory that turned happy when Riley's parents and friends comforted her. Joy finally understands Sadness's purpose: alerting others when Riley is emotionally overwhelmed and needs help. Joy and Bing Bong try to use Bing Bong's old wagon rocket to escape the Memory Dump but are unable to fly high enough due to Bing Bong's weight. On their last attempt, Bing Bong jumps out to allow Joy to escape as he fades away.

Joy reunites with Sadness and they return to the Headquarters, but arrive too late as Anger's idea has disabled the console, rendering Riley apathetic. To the surprise of the others, Joy hands control of the console to Sadness, who is able to reactivate it and prompt Riley to return to her new home. As Sadness reinstalls the core memories, transforming them from happy to sad, Riley tearfully confesses to her parents that she misses her old life. Her parents comfort her and admit they also miss Minnesota. Joy and Sadness work the console together, creating a new core memory consisting of happiness and sadness; a new island forms, representing Riley's acceptance of her new life in San Francisco.

A year later, Riley has adapted to her new home, made new friends, and returned to her old hobbies while acquiring a few new ones. Inside the Headquarters, her emotions admire Riley's new personality islands, and all work together on a newly expanded console with room for them all. 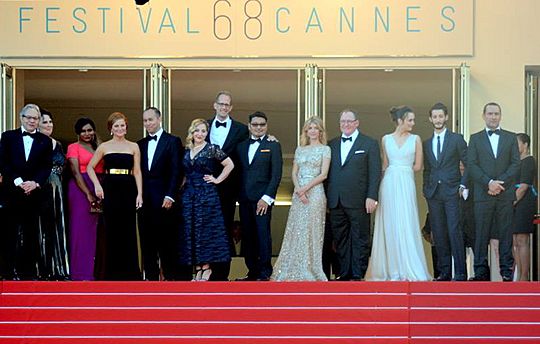 In June 2015, when asked if there are plans for a possible sequel, Pete Docter replied, "There's no sequel idea from me at this point," adding, "Never say never." In January 2016, Docter stated that a sequel is possible, and that he and Pixar will explore ideas. In a July 2016 interview, Pixar president Jim Morris said that while demand for a sequel is high, the company has committed its resources to several original movie concepts and that no sequels to any of Pixar's other films, including Inside Out, were being contemplated at that time.

In June 2017, Denise Daniels, a child psychologist from Minnesota, filed a lawsuit against Disney and Pixar for breach of contract. Daniels had been working on a creative project, The Moodsters, with a theme very similar to Inside Out and had discussed prospects of a TV production with Disney and Pixar executives, including with the film's eventual director Pete Docter. Daniels claims that she presented in detail her idea for "color-coded, anthropomorphic" characters represented different types of emotion, used as the children's learning tool for "better understand[ing]". The discussions were held between 2006 and 2009, and Daniels argued that they carried an implied contract for her to be compensated if the ideas were used by Disney. In January 2018, her suit was dismissed by judge Philip Gutierrez, who ruled that since Daniels had released materials related to the project publicly at the time of the conversations, there were no grounds for an implied contract between Disney and Daniels. Daniels appealed to the Ninth Circuit, who upheld the District Court's ruling in March 2020 that Pixar's film did not infringe on Daniels' characters. The decision stated that simply creating "color-coded" characters based on emotions was not enough to be copyrighted, but instead would have required these characters to carry similar characterization elements, as they had previously determined in DC Comics v. Towle in 2015.

All content from Kiddle encyclopedia articles (including the article images and facts) can be freely used under Attribution-ShareAlike license, unless stated otherwise. Cite this article:
Inside Out (2015 film) Facts for Kids. Kiddle Encyclopedia.