Lasseter began his career as an animator with The Walt Disney Company. After being fired from Disney for promoting computer animation, he joined Lucasfilm, where he worked on the then-groundbreaking use of CGI animation. The Graphics Group of the Computer Division of Lucasfilm was sold to Steve Jobs and became Pixar in 1986. Lasseter oversaw all of Pixar's films and associated projects as executive producer. In addition, he directed Toy Story (1995), A Bug's Life (1998), Toy Story 2 (1999), Cars (2006), and Cars 2 (2011). From 2006 to 2018, Lasseter also oversaw all of Walt Disney Animation Studios' (and its division Disneytoon Studios') films and associated projects as executive producer.

The films he has made have grossed more than $19 billion U.S. dollars, making him one of the most successful filmmakers of all time. Of the seven animated films that have grossed more than $1 billion U.S. dollars, five of them are films executive produced by Lasseter. The films include Toy Story 3 (2010), the first animated film to pass a billion, Frozen (2013), the current highest grossing animated film of all time, as well as Zootopia (2016), Finding Dory (2016) and Incredibles 2 (2018).

He has won two Academy Awards, for Best Animated Short Film (for Tin Toy), as well as a Special Achievement Award (for Toy Story).

In November 2017, Lasseter took a six-month break from Pixar and Disney Animation. In June 2018, Disney announced that he would be leaving the company at end of the year, but is taking on a consulting role until then. 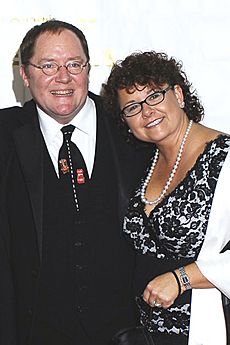 John Lasseter with his wife Nancy Lasseter at the 2006 Annie Awards red carpet at the Alex Theatre in Glendale, California

Lasseter lives in Glen Ellen, California with his wife Nancy, a graduate of Carnegie Mellon University, whom he met at a computer graphics conference in San Francisco in 1985. Nancy majored in computer graphics applications, and for a short period of time, worked as a household engineer and as a computer graphics engineer at Apple Computer. They married in 1988, and have five sons, born between 1979/1980 and 1997.

The Lasseters own Lasseter Family Winery in Glen Ellen, California. The property includes a narrow gauge railroad named the Justi Creek Railway (for the "Marie E.", the locomotive Lasseter purchased from Ollie Johnston) approximately 2 miles (3.2 km) long, including a train station and water tower Lasseter purchased from former Disney animator Ward Kimball. Their residence has a swimming pool with a lazy river that runs through a cave. Lasseter owns a collection of more than 1,000 Hawaiian shirts and wears one every day. Lasseter also inherited his late father's passion for cars; besides having directed two films about them, he watches auto races at Sonoma Raceway near his home and collects classic cars, of which one of his favorites is his black 1952 Jaguar XK120.

On May 2, 2009, Lasseter received an honorary doctorate from Pepperdine University, where he delivered the commencement address.

All content from Kiddle encyclopedia articles (including the article images and facts) can be freely used under Attribution-ShareAlike license, unless stated otherwise. Cite this article:
John Lasseter Facts for Kids. Kiddle Encyclopedia.