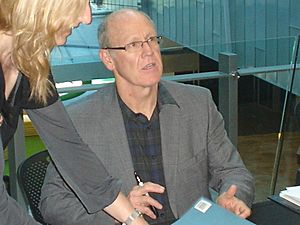 Keane was born in Philadelphia, Pennsylvania. He is the son of cartoonist Bil Keane, creator of The Family Circus, and Australian-born Thelma Keane. He grew up in Paradise Valley, Arizona. He married Linda Hesselroth in 1975. The couple have two children. Keane has aphantasia.

All content from Kiddle encyclopedia articles (including the article images and facts) can be freely used under Attribution-ShareAlike license, unless stated otherwise. Cite this article:
Glen Keane Facts for Kids. Kiddle Encyclopedia.