Paradise Valley is a town in Maricopa County, Arizona, United States, and a suburb of Phoenix. It is Arizona's wealthiest municipality. The town is known for its luxury golf courses, shopping, real estate, and restaurant scene. According to the 2010 census, the population of the town was 12,820. Despite its relatively small area and population compared to other municipalities in the Phoenix metropolitan area, Paradise Valley is home to eight full-service resorts, making it one of Arizona's premier tourist destinations. It is also known for expensive real estate.

Paradise Valley is the wealthiest suburb of Phoenix. It is known primarily for its many resorts and expensive real estate. However, its history dates back to a more agrarian society.

After the initial European settlement, Paradise Valley was first used for cattle grazing. In the 1880s, when the land was being surveyed so it could be developed into agricultural lots, the name "Paradise Valley" first came into use, being given by surveyors from the Rio Verde Canal Company and its manager at the time, Frank Conkey. According to the official town website, this name may have been chosen due to the abundance of spring wildflowers and Palo Verde trees. Mainly an agricultural area during the 1800s and the first half of the 1900s, the area began to be settled after World War II, on large one to five acre lots for which it became known.

As the neighboring settlements of Phoenix and Scottsdale began to grow and annex adjoining areas, the residents of what would become Paradise Valley were concerned that the qualities they most valued would be lost if they were consumed by their larger neighbors. These residents formed "Citizens Committee for the Incorporation of The Town of Paradise Valley, Arizona", which collected enough signatures to take to the Maricopa County Board of Supervisors. The petition was granted by the Supervisors, allowing the town of Paradise Valley to be incorporated on May 24, 1961.

According to the United States Census Bureau, the town has a total area of 15.5 square miles (40 km2), all of it land.

The central terrain of Paradise Valley is dominated by Mummy Mountain. Other landmarks include Camelback Mountain on the southern border and the Piestewa Peak mountainous area on the western border. 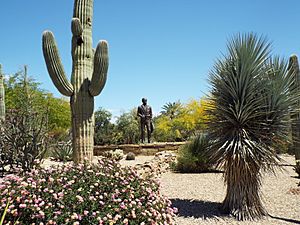 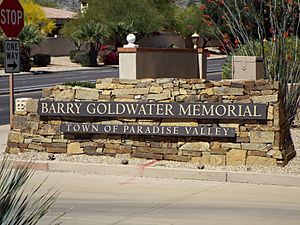 Paradise Valley's motto, coined by residents, is "there is a reason we call this valley 'paradise'".

According to Paradise Valley's 2014 Comprehensive Annual Financial Report, the top employers in the town are:

Several charter schools also are in the area, including nearby Great Hearts Academies and BASIS Schools, as well as private schools such as Phoenix Country Day School.

All content from Kiddle encyclopedia articles (including the article images and facts) can be freely used under Attribution-ShareAlike license, unless stated otherwise. Cite this article:
Paradise Valley, Arizona Facts for Kids. Kiddle Encyclopedia.