Carefree is a town in Maricopa County, Arizona, United States. As of the 2010 United States Census, the population of the town is 3,363.

Characterised as an upscale residential area, Carefree was conceived in the mid-1950s by business partners K.T. Palmer and Tom Darlington as a master-planned community. Land sales commenced in 1955 and homebuilding started in 1958. Carefree was incorporated in 1984 to avoid annexation from neighboring Scottsdale. 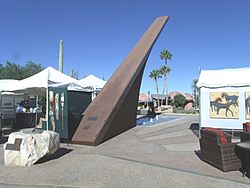 The Carefree sundial, designed by architect Joe Wong and solar engineer John I. Yellott, was erected in the Sundial Circle plaza in 1959 and claims to be the "third largest sundial in the Western Hemisphere". The sundial, which points to the North Star, is made from a steel frame and covered in anodized copper. It measures 90 feet (27 m) in diameter. The metal gnomon, the shadow-casting portion of the dial, stands 35 feet (11 m) above the plaza and extends 72 feet (22 m).

The studio was used for the filming of Bob Hope's last feature film, Cancel My Reservation, with Eva Marie Saint, Ralph Bellamy, and Forrest Tucker. Scenes were also shot at the studio for Michaelangelo Antonioni's Zabriskie Point, such as the back-lot house explosion, for Paul Newman's scenes in Pocket Money, for Bill Cosby's feature debut, Man and Boy, specifically the western street, and recently for Bill and Ted's Excellent Adventure, again the western street. The short, silent feature Time River was shot on Stages 2 and 3 and extensively on the back lot and western street sets.

Later known as Carefree Studios, it was razed in 1999. The Scottsdale Road studio back lot and pristine desert property was developed into retail space and residential development.

Carefree is 17 miles (27 km) west of Bartlett Lake, in the Tonto National Forest.

Carefree is bordered by the city of Scottsdale to the south and the town of Cave Creek to the west. Carefree and Cave Creek are often thought of as a single community. The two towns share the local landmark Black Mountain.

According to the United States Census Bureau, the town has a total area of 8.9 square miles (23 km2), all of it land.

The prehistoric Hohokam’s built villages and defensive fortifications. The Sears-Kay Ruin is one of the many forts built by the Hohokam. The ruins of this fort is located atop a desert foothill in the Tonto National Forest on the outskirts of the town of Carefree, Az. The fort was built around 1050 AD and later abandoned only to be discovered in 1867 by soldiers on patrol who were stationed in nearby Fort McDowell. The fort had 40 rooms which housed about 100 people. The area was named after two early homesteaders. The site was listed in the National Register of Historic Places in November 24, 1995, reference #95001310. 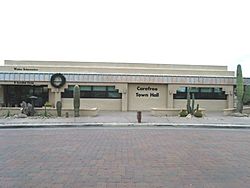 The town is served by Cave Creek Unified School District.

Cave Creek is not a member of Valley Metro and Cave Creek does not have local bus service.

All content from Kiddle encyclopedia articles (including the article images and facts) can be freely used under Attribution-ShareAlike license, unless stated otherwise. Cite this article:
Carefree, Arizona Facts for Kids. Kiddle Encyclopedia.