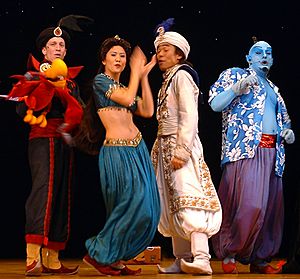 Photo taken at "Disney's Aladdin A Musical Spectacular" Show in 2003.

Aladdin is a fictional character and the Title character of Walt Disney Pictures's 31st animated feature film Aladdin (1992) based on Aladdin, a folk tale of Middle Eastern origin. He is voiced by American actor Scott Weinger, while his singing voice is provided by Brad Kane. He also stars in the two direct-to-video sequels The Return of Jafar (1994) and Aladdin and the King of Thieves (1996), as well as the animated television series based on the film. Mena Massoud is set to play a live-action version of the character in a live action adaptation of the 1992 film.

When Aladdin is initially introduced, he is eighteen years old. He never received a formal education, and has only learned by living on the streets of Agrabah. He has to steal food in the local market in order to survive. He was born to Cassim and his wife. When Aladdin was only an infant, his father left him and his mother in order to find a better life for his family. When Aladdin was two, his mother was captured by bandits and was presumed dead. Aladdin's parents were too poor to provide clothing for their son. When Aladdin was seven, he had his first encounter with Razoul, the new captain of the Sultan's guard. Aladdin had stolen an apple from a fruit stand.

Initially, the boy managed to outmaneuver the guards. Eventually, he was apprehended and sentenced to detention within the palace dungeon. However, he managed to escape by picking the locks to his chains. When he was twelve, he stole a vest, a pair of pants, and a fez from a clothes line. When he was sixteen he fell in with a group of circus performers, one of whom was the monkey Abu.

All content from Kiddle encyclopedia articles (including the article images and facts) can be freely used under Attribution-ShareAlike license, unless stated otherwise. Cite this article:
Aladdin (Disney character) Facts for Kids. Kiddle Encyclopedia.