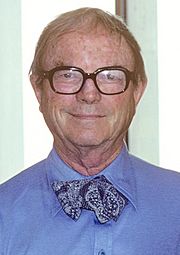 He was known for his works in Looney Tunes and in Tom & Jerry. He directed many of the Bugs Bunny and Daffy Duck cartoons. He won an Academy Award for Best Animated Short. Jones produced 34 Tom and Jerry shorts from 1963 to 1967.

Jones was born on September 21, 1912 in Spokane, Washington. He was raised in Los Angeles, California. Jones studied at the Chouinard Art Institute.

He was married to Dorothy Webster from 1935 until her death in 1978. Then he was married to Marian J. Dern from 1981 until his death in 2002. He has a daughter with Webster, Linda Jones Clough.

All content from Kiddle encyclopedia articles (including the article images and facts) can be freely used under Attribution-ShareAlike license, unless stated otherwise. Cite this article:
Chuck Jones Facts for Kids. Kiddle Encyclopedia.