How the Grinch Stole Christmas! facts for kids 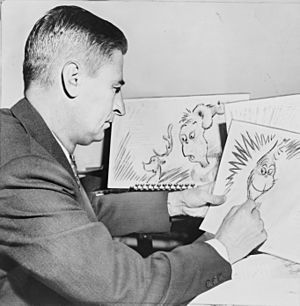 Dr. Seuss draws a picture of the Grinch in 1957

How the Grinch Stole Christmas! is a children's story. It was written by Dr. Seuss. It is written in rhymed verse. Dr. Seuss drew the pictures. It was published in 1957 as a book by Random House. It was also published in a magazine called Redbook. The book criticizes the commercialization of Christmas. It also makes fun of those who profit from exploiting the holiday. An animated television program of the story was made in 1966. Boris Karloff narrated the show. The character then appeared in the television specials Halloween is Grinch Night and The Grinch Grinches The Cat in the Hat. He also was a recurring villain in The Wubbulous World of Dr. Seuss, an educational show for kids, and had a small part in the Broadway play Seussical. In 2000 a movie was made based on the book. Jim Carrey played the Grinch.

The Grinch is a nasty creature who lives high on a mountain with his dog Max. He hates the happy people of Whoville and their Christmas celebrations. He goes to Whoville. He steals all the presents, decorations, and food. He thinks Christmas will not come because he has been so mean. Christmas comes all the same. He realizes that Christmas is more than just presents and decorations. His heart grows three sizes larger. He returns all the presents and trimmings. The people of Whoville welcome him.

All content from Kiddle encyclopedia articles (including the article images and facts) can be freely used under Attribution-ShareAlike license, unless stated otherwise. Cite this article:
How the Grinch Stole Christmas! Facts for Kids. Kiddle Encyclopedia.