Gay Purr-ee is a 1962 American animated musical film produced by United Productions of America and released by Warner Bros. It features the voice of Judy Garland in her only animated-film role, as well as Robert Goulet in his first feature film. The film received positive reviews, but was a box office bomb. It is also the first animated feature film to be theatrically released by Warner Bros, and the second of 2 animated films by UPA.

The story is set in 1895 France and takes place predominantly in Paris. However, it begins on a farm in rural Provence. The lovely cat Mewsette and the accomplished but shy mouser Jaune Tom are in love, until the former is frustrated with his plebeian ways (and those of the farm), to the point of calling him a "clumsy country clod". Inspired by the human Jeanette's stories of glamour and sophistication in Paris, Mewsette runs away by taking a train to the big city, where she encounters the slick con-cat Meowrice. Taking advantage of the country kitty's naivete, he puts her in the care of the sultry Madame Henretta Reubens-Chatte, who promises to turn Mewsette into a dainty debutante known as "The Belle of all Paris". Unbeknownst to Mewsette, Meowrice is grooming her to be the mail-order bride of a rich American cat in Pittsburgh known as "Mr. Henry Phtt". Meanwhile, Jaune Tom and his sidekick Robespierre arrive in Paris, searching for Mewsette.

Training does not go well. Just as Mewsette is about to give up and return to the farm, Meowrice takes her out to see the cat side of Paris, the Eiffel Tower, the Champs-Élysées and the Mewlon Rouge and then take a buggy ride back home. Reinvigorated, she returns to her studies. Jaune Tom and Robespierre arrive just at that moment but get waylaid by one of Meowrice's shadowy cat henchmen and barely escape drowning in Paris's famous labyrinthine sewers. By coincidence, Jaune Tom displays his incredible mouse-hunting skills in front of Meowrice (known as "Virtue-Mousety"), who sees a money-making opportunity, gets them drunk, and sells them as mousers to a ship bound for Alaska. On the ship, Robespierre consoles a depressed Jaune Tom, telling him that any problem, regardless of size, can be broken up into manageable pieces, by remarking that even the mighty ocean is made up of little drops of water. Jaune Tom has a vision of Mewsette singing about how no problem is unconquerable, and the importance of never giving up.

Mewsette finishes her training and is now lovely enough to impress even Meowrice, who commissions a series of paintings of her by such famous artists as Claude Monet, Henri de Toulouse-Lautrec, Georges Seurat, Henri Rousseau, Amedeo Modigliani, Vincent van Gogh, Edgar Degas, Auguste Renoir, Paul Cézanne, Paul Gauguin and Pablo Picasso (an opportunity for the animators to indulge in some artistic parodies), so that he can send them to Mr. Phtt. Meowrice quietly writes a check to pay his "sister", Madame Reubens-Chatte (using disappearing ink, so that the check is worthless), and takes Mewsette to his hideout in Notre Dame. There, he reveals his plan to ship her to America and tries to coerce her to enter a luggage crate, but after seeing a portrait of Mr. Phtt depicting him as fat and old, she manages to escape Meowrice and his sidekicks. In the resulting chase scene, she leads them to a bulldog, who injures Meowrice badly enough to put him out of action for six weeks. Meanwhile, his sycophants (who are nowhere near as intelligent as he is) comb the city without success, searching for Mewsette.

Meanwhile, not long after they reach Alaska (a howling wilderness of snow), Jaune Tom and Robespierre strike gold thanks to the former's mouse-hunting skills. Now wealthy, the two cats hurry back to Paris.

A disillusioned and homeless Mewsette wanders around the streets of Paris and stops atop a bridge over the river where she attempts to leap to her death, but she is captured by Meowrice and his sidekicks. She is taken to the Gare du Nord railway station, en route to a boat to America, and all hope seems lost, when Jaune Tom and Robespierre arrive. They have been aided by Madame Ruebens-Chatte, who is irritated that her own "brother" double-crossed her and tears up the worthless check. In a humorously over-the-top fight scene inside the boxcar of a moving train, the three heroes defeat Meowrice and pack him into the crate intended for Mewsette, doubtless that this will be a nasty surprise for Mr. Phtt. The film concludes with Mewsette, Jaune Tom and Robespierre enjoying the high life in Paris that Mewsette was seeking when she left home. 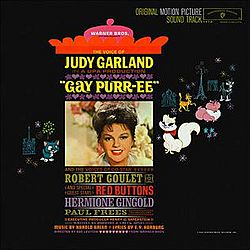 On November 4, 2003, Rhino Handmade, a division of the Warner Music Group, released the soundtrack on CD. This was identical to the 1962 LP version but contained 5 additional demo tracks. The demo tracks are performed by Harold Arlen and E. Y. "Yip" Harburg, the composers of the songs for the movie. They were also the primary songwriters for the music of The Wizard of Oz, the 1939 Garland feature. Garland stated that the song "Little Drops of Rain" was one of her favorite songs, along with "Over the Rainbow". The CD track listing is as follows:

All content from Kiddle encyclopedia articles (including the article images and facts) can be freely used under Attribution-ShareAlike license, unless stated otherwise. Cite this article:
Gay Purr-ee Facts for Kids. Kiddle Encyclopedia.