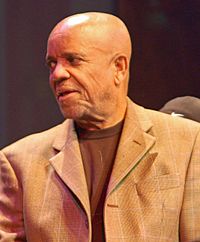 Berry Gordy Jr. (born November 28, 1929) is an American entrepreneur and producer. He founded Motown Records. He is associated with musical acts, such as Smokey Robinson, Diana Ross, The Supremes and Stevie Wonder. His son Kennedy Gordon was signed to Motown. Gordy was born in Detroit.

All content from Kiddle encyclopedia articles (including the article images and facts) can be freely used under Attribution-ShareAlike license, unless stated otherwise. Cite this article:
Berry Gordy Facts for Kids. Kiddle Encyclopedia.