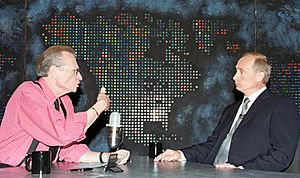 The Larry King Show is a radio talk show hosted by Larry King which was broadcast nationally over the Mutual Broadcasting System from January, 1978 to May, 1994. A typical show consisted of King interviewing a guest, then taking phone calls from listeners for the guest, and then taking phone calls on any topic. In 1982, the show won a Peabody Award.

All content from Kiddle encyclopedia articles (including the article images and facts) can be freely used under Attribution-ShareAlike license, unless stated otherwise. Cite this article:
Larry King Show Facts for Kids. Kiddle Encyclopedia.