Bessemer is a southwestern suburb of Birmingham in Jefferson County, Alabama, United States. The population was 27,456 at the 2010 Census. It is within the Birmingham-Hoover, AL Metropolitan Statistical Area, of which Jefferson County is the center. It developed rapidly as an industrial city in the late 19th and early 20th centuries. In 2019, it was named Alabama's "Worst City to Live in" by 24/7 Wall Street.

The town was founded in the postbellum era by the Bessemer Land and Improvement Company, owned by coal magnate Henry F. DeBardeleben, after he had inherited Daniel Pratt's investments. The mayor and councilmen voted to incorporate the city of Bessemer on September 9, 1887.

Bessemer is situated in the midst of the iron ore and limestone district of Alabama, in the southern part of Jones Valley (about 3 miles (4.8 km) wide). Iron ore was mined on the hills on the city's southeast side, coal was (and still is) mined to the north and west, and limestone deposits were also nearby. All three ingredients were necessary for steelmaking, which led to the area becoming a major steel center from about 1890 through the twentieth century. Steel is no longer made within the city limits, but is still manufactured in the neighboring city of Fairfield.

The climate in this area is characterized by hot, humid summers and generally mild to cool winters. According to the Köppen Climate Classification system, Bessemer has a humid subtropical climate, abbreviated "Cfa" on climate maps. 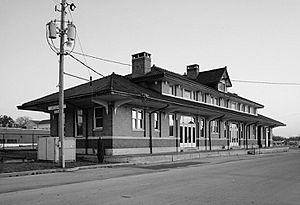 By 2006, the companies noted above had consolidated to CSX Transportation, which has lines to Birmingham and Brookwood; and the Norfolk Southern Railway, with lines to Birmingham, Mobile and New Orleans; Birmingham Southern continues in service. A major railroad feature is the "High Line", constructed by Tennessee Coal & Iron (predecessor to U.S. Steel) to ship iron ore from the mines on the city's south side to the steel works in nearby Fairfield. This elevated line traverses the eastern side of the city. Though tracks were removed over much of the High Line when the mines closed, part of the line is still used by the Birmingham Southern. All of the roadbeds and bridges remain in place.

Bessemer is served by the small Bessemer Airport to the southeast of the city. Commercial service in the region is provided by the much larger Birmingham-Shuttlesworth International Airport, located 5 miles (8.0 km) north of downtown Birmingham (about 21 miles away in total). 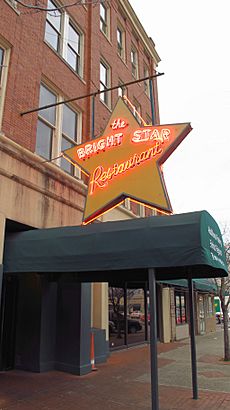 The Bright Star in Bessemer is Alabama's oldest restaurant 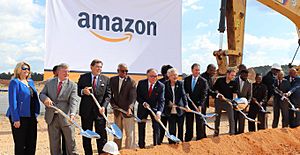 The groundbreaking of the Amazon fulfillment center in Bessemer in 2018.

In 1900, Bessemer ranked eighth in population in the state, second in amount of capital invested in manufacturing, and fourth in the value of its manufactured product for the year. By 1911, ore mining, iron smelting, and the manufacture of iron and coke were the chief industries of Bessemer. Truck farming was also an important industry, dating from the area's agricultural past.

Both blacks and whites from rural areas were attracted to the city for its new work opportunities. Gradually African Americans moved into industrial jobs and became part of integrated unions; such jobs enabled many working-class families to enjoy middle-class incomes.

Today, ore mining has ended, as supplies were exhausted. Manufacturing remains a factor, with the U.S. Pipe and Foundry ductile pipe plant on the city's north side. On May 9, 2007, U.S. Pipe announced that it would be building a new $45-million foundry near the current plant. The site was selected, among other reasons, for having available space for potential future expansions. U.S. Pipe is the largest domestic producer of Ductile Iron pipe in sizes 4 inch through 64 inch.

The city was once home to a large railroad car manufacturing factory, operated by Pullman Standard for many decades and later by Trinity Industries. With railroad restructuring in the late 20th century and other manufacturing moving offshore, this plant ceased most production in the 1990s. In 2012, BLOX LLC (bloxbuilt.com) a manufacturer of modular components for healthcare facilities moved into this facility.

The decline of mining and exodus of the steelmaking and railcar manufacturing industries resulted in extensive loss of jobs. The city has lost population since a peak in 1970. It faced an economic crisis in the early to mid-1980s, as unemployed workers constituted more than one-third of the workforce. Since that time the city, through the efforts of the Bessemer Area Chamber of Commerce and the Bessemer Industrial Development Board, has been successful in diversifying its economy. It is recognized for its business growth. In June 2018, Amazon announced that it would build a new 800,000 square feet (74,000 m2), $325 million fulfillment center in Bessemer which will initially create 1,500 new jobs.

Crime increased following the rise in unemployment and social disruption from the decline of manufacturing industries in the area. As of 2019 Bessemer ranks first in terms of violent crimes for US cities with 25,000 or more people.

K–12 private schools in the Bessemer include Rock Christian School and Bessemer Academy, which was founded as a segregation academy.

All content from Kiddle encyclopedia articles (including the article images and facts) can be freely used under Attribution-ShareAlike license, unless stated otherwise. Cite this article:
Bessemer, Alabama Facts for Kids. Kiddle Encyclopedia.