Jefferson County is the most populous county in the U.S. state of Alabama, located in the central portion of the state. As of the 2020 census, its population was 674,721. Its county seat is Birmingham. Its rapid growth as an industrial city in the 20th century, based on heavy manufacturing in steel and iron, established its dominance. Jefferson County is the central county of the Birmingham-Hoover, AL Metropolitan Statistical Area. 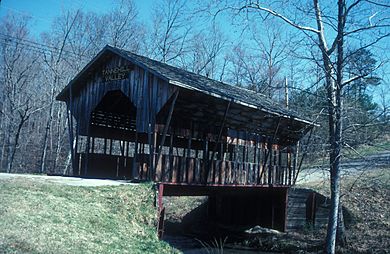 Jefferson County was established on December 13, 1819, by the Alabama Legislature. It was named in honor of Thomas Jefferson. The county is located in the north-central portion of the state, on the southernmost edge of the Appalachian Mountains, in the center of the (former) iron, coal, and limestone mining belt of the Southern United States.

Birmingham was founded about 1871 and in 1873 gained designation as the county seat. It was named for the English city of the same name in Warwickshire. That city had long been a center of iron and steel production in Great Britain. Birmingham was established by the merger of three towns, including Elyton. It has continued to grow by annexing neighboring towns and villages, including North Birmingham.

As Birmingham industrialized, its growth accelerated, particularly after 1890. It attracted numerous migrants, both black and white, from rural areas for its new jobs. It also attracted European immigrants. Despite the city's rapid growth, for decades it was underrepresented in the legislature and could not get its urban needs addressed, as rural counties hung on to their power in the legislature.

Racial tensions increased in the late 19th century as whites worked to maintain white supremacy. The white, conservative Democrat-dominated legislature passed a new constitution in 1901 that disfranchised most blacks and many poor whites, excluding them totally from the political system. Economic competition also raised tensions.

Even after 1950, racial violence of whites against blacks continued, especially as civil rights activities increased in Birmingham. In the 1950s KKK chapters bombed black houses to discourage residents moving into new areas. In that period, the city was referred to as "Bombingham." The city finally agreed in 1963 to integrate public facilities and hire more African Americans, following a non-violent campaign based at the 16th Street Baptist Church and an economic boycott of white stores that refused to hire blacks. Whites struck again: on a Sunday in September 1963, KKK members bombed the 16th Street Baptist Church, killing four young black girls and injuring many individuals. The African-American community quickly rebuilt the damaged church.

Jefferson County filed for bankruptcy on November 9, 2011. This action was valued at $4.2 billion, with debts of $3.14 billion relating to sewer work; it was then the most expensive municipal bankruptcy ever in the U.S. In 2013 it was surpassed by the Detroit bankruptcy in Michigan. The County requested Chapter 9 relief under federal statute 11 U.S.C. §921. The case was filed in the Northern District of Alabama Bankruptcy Court as case number 11-05736.

As of May 2012[update], Jefferson County had slashed expenses and reduced employment of county government workers by more than 700.

According to the 2010 United States census, residents of metropolitan Jefferson County identified as the following:

The largest self-reported European ancestries in Jefferson County, Alabama are English 9.7%(64,016), "American" 9.6%(63,015), Irish 8.6%(56,695), German 7.2%(47,690). Many Americans whose ancestors came from Britain or Ireland identify simply as American, because their immigrant ancestors arrived so long ago, in some cases in the 17th and 18th centuries. Demographers estimate that roughly 20–23% of people in Alabama are of predominantly English and related British Isles ancestry. Researchers believe that more of the European-American population has Scots-Irish ancestry than residents identify with today. In addition, many African Americans have mixed-race ancestry, with some ancestors from the British Isles. Having been classified in the South as black under racial segregation, some of these families are beginning to use DNA tests to learn about and acknowledge European ancestors. Some identify as Multiracial as a result.

Birmingham is the location of the Birmingham-Shuttlesworth International Airport, which provides service, either direct or connecting, to most of the rest of the United States.

Beginning in 1959, more wealthy towns, with predominately white populations, began to form their own school systems. Critics allege this served to stymie integration and financially starve schools that served mostly black populations. Cities in the county that have established their own school systems are Gardendale, Bessemer, Fairfield, Midfield, Trussville, Homewood, Leeds, Hoover, Vestavia Hills, Tarrant, and Mountain Brook. The pattern of residential and economic segregation has occurred in many parts of the country, including economic segregation of poorer whites.

All content from Kiddle encyclopedia articles (including the article images and facts) can be freely used under Attribution-ShareAlike license, unless stated otherwise. Cite this article:
Jefferson County, Alabama Facts for Kids. Kiddle Encyclopedia.