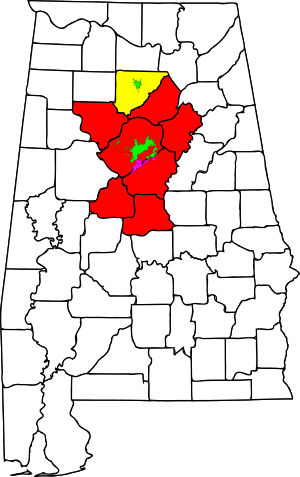 As of 2013, the federal government defines the Birmingham-Hoover, AL Metropolitan Statistical Area as consisting of seven counties (Bibb, Blount, Chilton, Jefferson, St. Clair, Shelby, and Walker) centered on Birmingham. The population of this metropolitan statistical area as of the 2010 census was 1,130,047, making it the 49th largest metropolitan statistical area in the United States as of that date. According to the United States Census 2013 estimate, the metro area has a population of 1,140,300.

Suburbs with more than 10,000 inhabitants

Birmingham received $87 million from the US Congress to help fund a regional transportation system. However, no progress has been made. The only form of regional mass transit is the Birmingham-Jefferson County Transit Authority (BJCTA) bus system, which has been severely underfunded.

Birmingham ranks as one of the top automobile cities, and routinely fails EPA air quality standards.

There have been proposals to build a major international airport in the Greater Birmingham area to serve as a relief airport for Atlanta, but no official plans have been made.

All content from Kiddle encyclopedia articles (including the article images and facts) can be freely used under Attribution-ShareAlike license, unless stated otherwise. Cite this article:
Birmingham metropolitan area, Alabama Facts for Kids. Kiddle Encyclopedia.