Red Mountain is a long ridge running southwest-northeast and dividing Jones Valley from Shades Valley south of Birmingham, Alabama. It is part of the Ridge-and-Valley region of the Appalachian mountains. The Red Mountain Formation of hard Silurian rock strata lies exposed in several long crests, and was named "Red Mountain" because of the rust-stained rock faces and prominent seams of red hematite iron ore. The mountain was the site of the Sloss Mines, which supplied ore to Birmingham's iron furnaces. The best displays of the mountain's geological strata occur at the Twentieth Street cut near the Vulcan statue and at the U.S. Route 31 highway cut leading into the suburb of Homewood. Most of Birmingham's television and radio stations have their transmission towers located on Red Mountain. Red Mountain is also home to the newly created Red Mountain Park, one of the nation's largest urban parks at 1,500 acres (6.1 km2), making it larger than even New York City's Central Park.

At Birmingham the lower 100 feet (30 m) is predominantly shaly and there is a 20-foot (6.1 m) bed of thick-layered sandstone 34 feet (10 m) above the bottom. Above this shaly part lies the Irondale ore bed, which is separated from the Big Seam of iron ore by a few feet of shale and of sandstone layers that carry large and small waterworn pebbles. Next above lies the Big seam, approximately 17 feet (5.2 m) thick, above which these is about 38 feet (12 m) of red sandstone that carries small quartz pebbles, the lower 14 feet (4.3 m) of which has yellow shale about equal in amount to sandstone. About 30 feet (9.1 m) still higher is the Pentamerus-bearing bed (Hickory Nut seam), a ferruginous sandstone full of casts of the interiors of the big brachiopod Pentamerus oblongus. There is still about 70 feet (21 m) more of sandstone, largely reddish, and shale to the top of the Red Mountain formation, making a total thickness in this part of Red Mountain of about 260 feet (79 m).

[...]The most interesting and valuable feature of the Red Mountain formation is its iron ore, which is the chief cornerstone of Alabama's industrial structure. Although ore of good quality and of workable thickness occurs elsewhere, as at Attalla, and on the Red Mountain along the west side of Murphrees Valley, the main deposit, the Big seam, lies under Shades Valley and the part of the Cahaba coal field southeast of that part of Red Mountain which extends from a point a mile or two southwest of Bessemer to Morrow Gap about 8 miles (13 km) northeast of Birmingham.

[...]The Red Mountain ores are known as a red fossil ore, because originally the iron accumulated in extensive beds of fragments of fossils, principally the hard parts of crinoids, bryozoans, and brachiopods. The iron, from solution in some form, was precipitated upon and within these beds of fossil fragments and thus the ore beds are simply a particular kind of sedimentary layers inclosed in ordinary sediments, shales, and sandstones, composing the bulk of the Red Mountain formation. As the fossil fragments were composed of calcium carbonate, which is the mineral that forms limestone, the iron ore beds at depth, where they are unweathered and where there has been no condition that permitted leaching of the lime content, carry a considerable percentage of lime, so that the ore is self-fluxing. Another type of ore is oolite ore, in which the iron oxide occurs in the form of small lenticular pellets. The precipitation of the iron that forms this ore started around some minute particle like a small grain of sand or fragment of fossil and built up a small lenticular body. The two kinds of ore are more or less mixed or one or the other may predominate in a particular layer of ore. – Geology of Alabama (1926)

There are many neighborhoods that are located along the 33 miles of Red Mountain, that stretches from Sparks Gap on the southwest to Trussville in the northeast. Some of these are Raimund, Muscoda, Lipscomb, Wenonah, Ishkooda, Greensprings, Irondale, Ruffner, and Trussville. Located just southeast of downtown Birmingham, on Red Mountain, is Redmont Park, which was developed in the 1920s by Robert Jemison. It was the home to Birmingham's early bankers and iron and steel industrialists. It became one of Birmingham's most prominent neighborhoods, home to the majority of the multimillion-dollar residences and estates that are located within the city proper. The prestigious Altamont School, a private school well known for its arts and science programs, is located in the neighborhood, as well as Saint Rose Academy, a Catholic parochial school run by Dominican sisters.

The proximity of Red Mountain's ore to nearby sources of coal and limestone was the impetus to develop and promote the Birmingham District as an industrial site. The mining of iron ore along Red Mountain began in the early 1860s as the Civil War created a demand for iron necessary to sustain the Confederate war efforts. The Union army destroyed the Oxmoor, Irondale and Tannehill furnaces in 1865 and at this point mining stopped along Red Mountain. After the Civil War the production of iron was again being renewed but this time on a commercial level. Under the leadership of such men as Debardeleben, Sloss, and Woodward the mining of iron ore along Red Mountain began again. The mountain developed a symbolic place as the source of wealth in the region and was even portrayed as a character in pageants sponsored by the steel companies in their company towns. In the Altamont and Redmont areas the abandoned mine sites served as the locations for large estates and upper-class developments which offered cool breezes and a panoramic view of the growing industrial city from above the constant layer of thick black smoke. Alex Harvey "Rick" Woodward's home is in this area along Altamont Road. His home is now owned and maintained by the University of Alabama at Birmingham and used as the residence of the University president.

As the steel furnaces modernized, labor cost rose, and geological faults in the local ore mines made the ore harder to reach, it became more economical to purchase pelletized ore from distant sources than to continue mining ore from Red Mountain. The last ore mine on Red Mountain closed in 1962 and was operated by US Steel. The last ore mine in the Birmingham district closed in 1972. It was the Pyne Mine off Highway 150 near Bessemer and was operated by the Woodward Iron Company.

In 1938, the giant cast-iron statue of the Roman god of the forge, Vulcan, which represented Birmingham in the 1904 St. Louis World's Fair was put on display atop a sandstone tower built by the Works Progress Administration. This is the world's largest cast-iron statue.

Red Mountain serves as a natural promontory for Birmingham's radio and television broadcast stations, and a setting for noteworthy private restaurant "The Club." 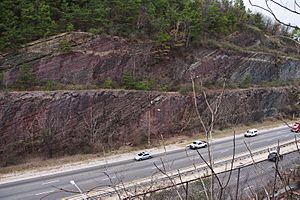 a portion of the Red Mountain Cut

In 1970, the "Red Mountain Expressway" was completed after many years of work cutting through Red Mountain. This highway linked Birmingham with its southern suburbs and spurred suburban growth towards the south of Birmingham. The resultant cut exposed geological strata spanning millions of years, including the red ore seam that spurred Birmingham's development. A new species of Lower Silurian (middle Llandovery) phacopsid trilobite, Acaste birminghamensis, was first collected from exposures on Red Mountain

A science museum, the Red Mountain Museum, was opened on the slope adjacent to the cut in 1971. Interpretive signage was installed along one of the terraces of the cut and guardrails and fencing installed to allow museum visitors to inspect the exposed rock close-up. From the late 1970s until 1994, the Red Mountain Museum was quite active in paleontological research, collecting fossil vertebrates and invertebrates from hundreds of localities throughout the state. The staff collected and cataloged tens of thousands of fossils, including many Cretaceous mosasaurs, Pleistocene ground sloths, and primitive Eocene archaeocete whales. Paleontologists, zoologists, geologists and archeologists once employed at the Red Mountain Museum, either as paid staff or as volunteers, include its first curator Whitman Cross, Gorden L. Bell, Jr., James P. Lamb, Winston C. Lancaster, Caitlín R. Kiernan, Susan Henson, and Amy Sheldon.

The fantasy writer and paleontologist Caitlín R. Kiernan has used Red Mountain, particularly the area west of U.S. Route 31 and the Red Mountain cut, as the setting for four of her novels – Silk (1998), Threshold (2001), Low Red Moon (2003), and, to a much lesser extent, Murder of Angels (2004). The geography and geology of the mountain was integral to the plot of Threshold, and in a chapbook on the novel (Trilobite: The Writing of Threshold; Subterranean Press, 2003), Kiernan includes an afterword describing the geological history and paleontology of the Paleozoic strata of Red Mountain. Fannie Flagg's novel, 'I Still Dream About You,' features Red Mountain prominently.

All content from Kiddle encyclopedia articles (including the article images and facts) can be freely used under Attribution-ShareAlike license, unless stated otherwise. Cite this article:
Red Mountain (Birmingham) Facts for Kids. Kiddle Encyclopedia.