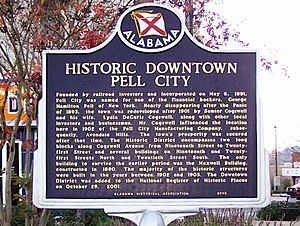 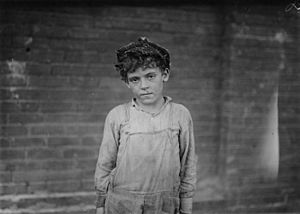 One of the young doffers working in Pell City Cotton Mill, 1910. Photo by Lewis Hine.

Pell City was founded in 1890 by railroad investors and named after Jonathan H. Pell of the Pell City Iron and Land Company, one of its financial backers. The city was incorporated on May 6, 1891, but nearly failed during the Panic of 1893. However, it was revived in 1902 when Sumter Cogswell built the Pell City Manufacturing Company, which subsequently became Avondale Mills, a major landmark of the town until Thunder Enterprises, a Tennessee company, bought the building and began dismantling the factory in 2008. The mill was the economic and social center of the town during its development and early growth. Besides the textile mill, other economic endeavors included agriculture and mercantile establishments. Large cotton, soybean, and cattle farms were located in the area. Pell City increased its size in 1956 when the nearby towns of Eden and Oak Ridge were merged with the city. The first mayor was Green Evans. 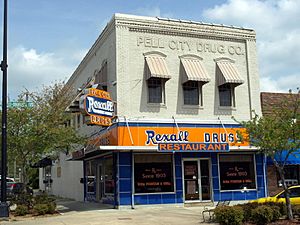 The residences of Sumter Cogswell and Green Evans (Pell City’s first mayor) are two of the earliest structures, dating from the late nineteenth century. The majority of the historic structures date from 1902 to 1905.

Ashville, Alabama, in the northern part of St. Clair County, was the only county seat from 1821 to 1907. A constitutional amendment in 1907 established Pell City as the second county seat. For many years, St. Clair County was the only county in the country with two full-service county seats. Both county seats remain operational to this day although Pell City has far outstripped Ashville in growth thanks in no small part to the convergence of both I-20 and Logan Martin Lake.

The construction of the Logan Martin Dam in 1964 changed the geography of the town by creating a large lake. This also created a large recreational area which brought new businesses, temporary summer residents and tourists and hundreds of new permanent residents building new homes along the new lake.

On April 8, 1998, an F2 tornado struck north of the city limits after the F5 tornado expired in western Jefferson County. This windstorm killed two people in a mobile home. It remained for 14 mi (23 km), partially damaging a church, twenty-six homes and mobile homes, and other buildings in Coal City. Ninety other homes and mobile homes suffered minor to major destruction. An additional twelve people were injured. The twister damaged a funeral home and twenty-five homes. The Bethel Baptist Church in Odenville was destroyed a few minutes after its members left an Easter pageant rehearsal that had been cancelled because of the storm.

According to the U.S. Census Bureau, the city has a total area of 27.2 square miles [sq mi] (70 km2), of which 24.6 sq mi (64 km2) is land and 2.6 sq mi (6.7 km2) or 9.57% is water. Pell City, situated on Interstate 20 between Birmingham, Alabama and Atlanta, Georgia is the largest city in St. Clair County. The city is 35 miles east of Birmingham and is located on the shores of Logan Martin Lake, created by the construction of Logan Martin Dam in 1964 to provide hydro-electric power to the central region of the state. The city is surrounded by the unincorporated communities of Wattsville to the north, Cropwell to the south, Seddon to the east, and Chula Vista to the west.

There were 3,830 households out of which 30.3% had children under the age of 18 living with them, 56.9% were married couples living together, 12.1% had a female householder with no husband present, and 27.6% were non-families. 24.5% of all households were made up of individuals and 10.9% had someone living alone who was 65 years of age or older. The average household size was 2.47 and the average family size was 2.92. 76.3% of residents were high school graduates or higher, and 17.1% held a bachelor's degree or higher.

The median household income in the city was $48,300. About 7.5% of families and 11.2% of the population were below the poverty line, including 15.2% of those under age 18 and 9.8% of those age 65 or over. However, these figures provide an incomplete picture of the area. Many of the affluent neighborhoods along the lake shore that are often considered part of Pell City are actually just outside the city limits in unincorporated areas. These neighborhoods constitute a sizable population and income level, but are not reflected in official city census data.

There were 3,830 households out of which 29.0% had children under the age of 18 living with them, 49.9% were married couples living together, 14.6% had a female householder with no husband present, and 31.2% were non-families. 27.3% of all households were made up of individuals and 10.4% had someone living alone who was 65 years of age or older. The average household size was 2.42 and the average family size was 2.92.

In the mid-2000s, Pell City experienced a period of rapid residential and commercial growth (estimated population around 16,000, excluding the unincorporated residential areas just south of the city along the lakefront) spurred, partly, by the opening of the Honda Plant in nearby Lincoln, Alabama, a new industrial park on its northeastern border, and by a new retail area on the north side of I-20 anchored by a Wal-Mart, Home Depot, and several fast food and casual dining restaurants.

A Publix supermarket, small shopping center, and several restaurants have opened on the south end of Pell City. It is thought these developments will spur growth on an end of town that has a sizable, affluent population (both in and outside the city), nearer to Logan Martin Lake, but has been under-served by commercial development.

In 2015, Pell City residents were given the opportunity to vote on the legalization of Sunday alcohol sales. A study commissioned by the City of Pell City projected a $6.8 million economic impact if the referendum passed. On August 11th, citizens voted 65% in favor of the referendum. On August 23rd, businesses were allowed to begin selling alcohol on Sundays for the first time. Likely due to the passage of this referendum, several corporate entities immediately entered into negotiations to open new restaurants and sports bars within the city. Buffalo Wild Wings announced its intention to build a brand new restaurant in late 2015. Construction and training were completed in October 2016, and the restaurant opened on November 7th, 2016.

The City announced in June 2016 that it had entered into an agreement with Premiere Cinemas to develop a new 40,000 sq ft entertainment center which would include seven movie screens, a 10-lane bowling alley, a cafe, arcade and event rooms. The complex is scheduled to open in the Spring of 2017.

All content from Kiddle encyclopedia articles (including the article images and facts) can be freely used under Attribution-ShareAlike license, unless stated otherwise. Cite this article:
Pell City, Alabama Facts for Kids. Kiddle Encyclopedia.