Vestavia Hills is a city in Jefferson and Shelby counties in the State of Alabama. It is an affluent suburb of the city of Birmingham. As of the 2010 census, its population was 34,033, up from 24,476 in 2000. It moved up from the fifth largest city in Jefferson County in 2000 to the third largest in 2010, behind Birmingham and Hoover. 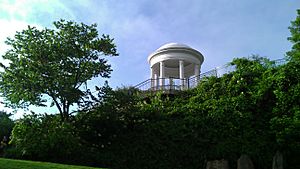 Vestavia Hills is named for the 20-acre (8.1 ha) estate of former Birmingham mayor George B. Ward. It was situated on the crest of Shades Mountain in what is now the northern edge of the city. Ward's mansion at the Vestavia estate became a landmark in the area as soon as it was completed in 1925. The 2+1⁄2-story house was patterned after the circular Temple of Vesta in Rome, with dark pink sandstone walls encircled by twenty massive white Doric columns surmounted by a carved entablature. The extensive gardens, populated by statuary and peacocks, surrounded a smaller domed gazebo patterned after the Temple of Sibyl in Tivoli.

After Ward's death, the house, something of a tourist stop near the highway between Birmingham and Montgomery, was used as a tearoom and reception hall before being purchased by Vestavia Hills Baptist Church. The church met in the temple like structure for several years before demolishing a portion of the building in 1971 to make way for a larger building; a central portion of the original building remains. The local garden club moved the gazebo to a prominent outcropping closer to the highway, there to serve as a landmark gateway into the community.

The development of Vestavia Hills as a residential suburb began in 1946, when developer Charles Byrd planned a subdivision for approximately a thousand persons on the southern flank of Shades Mountain. The suburb was incorporated as a separate city on November 8, 1950, and has since grown, by rapid development and annexation, into a thriving small city of over 34,000 by 2010.

Vestavia Hills is a large community that offers its citizens many open spaces for families to enjoy the day, participate in sporting events, and take part in community events. The city of Vestavia offers many club sports and the variety of sports is always growing. Right now, the city of Vestavia supports youth baseball, softball, girls and boys basketball, wrestling, soccer, lacrosse, football, flag-football, cheerleading, tennis, and swimming. These clubs use many of the parks and facilities offered by the city.

Wald Park is one of the biggest parks in the main part of Vestavia. The park sits on top of a hill right next to Vestavia Hills Elementary West and overlooks Vestavia Hills Elementary Central. The park includes many community areas such as the Vestavia Hills Swimming Pool, the Civic Center, and the Senior's Lodge. It is also a great place for kids and families. Wald Park offers five baseball fields, a walking track, a Community Playground, as well as a skatepark. The park is open every day from 5 a.m. until 9:30 p.m. Pets are allowed, but must be kept on a leash.

Byrd Park is a smaller local park, located next to Vestavia Hills Elementary East. It is a small area encircled by a walking path, and offers a picnic area and a playground for the children.

McCallum Park is an open area park offering only pavilions, restrooms, and a walking track. There is a large open field often used for picnics and family or community events. The park opens at 6:00 a.m. every day and closes at sunset. Pets are welcome, but must remain on a leash.

Liberty Park Sports Complex is located in the heart of Liberty Park behind the elementary and middle schools. It is home to nine softball fields, four youth fields and five adult fields. The complex also offers one football field and four natural grass soccer fields. The fields are the home to the local youth soccer club, Vestavia Hills Soccer Club. The fields open at daybreak and close at 9:30, except when events are going on. Pets are welcome.

Sicard Hollow Athletic Complex is an extension of the Liberty Park Sports Complex and is located on the road that runs behind it. Sicard Hollow is a growing complex that currently consists of a turf football and lacrosse field that double as soccer fields and an additional two turf soccer fields. Restrooms, concessions, score towers, and bleachers are available. There are plans to expand the complex to include an amphitheater, water area, dog park, and walking trails. Starting in 2016, the field will be the home ground for the Birmingham Hammers soccer club.

All content from Kiddle encyclopedia articles (including the article images and facts) can be freely used under Attribution-ShareAlike license, unless stated otherwise. Cite this article:
Vestavia Hills, Alabama Facts for Kids. Kiddle Encyclopedia.