Temple of Vesta facts for kids

The Temple of Vesta (Latin Aedes Vestae; Italian: Tempio di Vesta) is an ancient edifice in Rome, Italy, located in the Roman Forum near the Regia and the House of the Vestal Virgins. The temple's most recognizable feature is its circular footprint. Since the worship of Vesta began in private homes, the architecture seems to be a reminder of its history. The extant temple used Greek architecture with Corinthian columns, marble, and a central cella. The remaining structure indicates that there were twenty Corinthian columns built on a podium fifteen meters in diameter. The roof probably had a vent at the apex to allow smoke release. 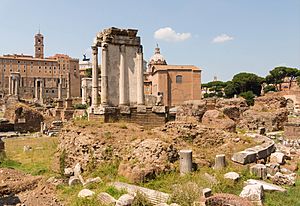 The most prominent feature of the ruins that were once the Temple of Vesta is the hearth.

All content from Kiddle encyclopedia articles (including the article images and facts) can be freely used under Attribution-ShareAlike license, unless stated otherwise. Cite this article:
Temple of Vesta Facts for Kids. Kiddle Encyclopedia.