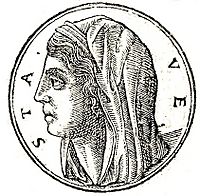 Engraving of the goddess Vesta

Vesta was the virgin goddess of the hearth, home, and family in Roman mythology. She rarely appeared in art, as her presence was symbolized by the sacred fire that burned at her temple. The temple was forbidden to all except her priestesses, the Vestal Virgins. The Roman equivalent of the Greek Hestia, Vesta was seen to protect everything that was most important to people's survival. She was not an central figure of many myths. The Roman Empire was governed by men. Independent women would have threatened that system. Vesta was an example of what the Romans thought a woman should be. They thought that women should be modest and not share their views.

The asteroid 4 Vesta is named for her.

All content from Kiddle encyclopedia articles (including the article images and facts) can be freely used under Attribution-ShareAlike license, unless stated otherwise. Cite this article:
Vesta (mythology) Facts for Kids. Kiddle Encyclopedia.