Helena (pronunciation hel-LE-nah) is a city in Jefferson and Shelby counties in the state of Alabama. Helena is considered a suburb of Birmingham and part of the Birmingham-Hoover Metropolitan Area. As of the 2020 census, the population was 19,657.

Helena is highly regarded as a place to live and raise children; Business Week ranked the city as the 13th "Best Place to Raise Your Kids" in 2007. It has the eighth-lowest crime rate per population in the U.S., and the city was ranked in Money magazine's 2007 list of "Best Places to Live: Top 100" in the U.S., placing at number 91. The Alabama League of Municipalities awarded Helena the 2008 Municipal Achievement Award (population 10,001 to 20,000).

The community that would become Helena started in 1845 as the town of Cove. In 1856 the town changed its name to Hillsboro, at the same time as a rolling mill was built. This rolling mill would produce arms for the Confederacy and would later be destroyed by Union raiders at the end of the Civil War.

During Reconstruction, railroads would be extended through Helena as part of the post-war development of central Alabama’s mineral resources. The Louisville & Nashville Railroad sent an engineer named Pete Boyle to survey a route south from Birmingham to Montgomery, Alabama. The station established near the town of Hillsboro was named Helena after Boyle’s sweetheart, Helen Lee. After the area around the station developed and encompassed the town of Hillsboro, the community incorporated to become the City of Helena. The City's first mayor was M.H. Williams, a railroad agent.

The steel mill was subsequently reopened and the city flourished during the late 19th century and into the early 20th century with numerous industrial facilities such as steel mills, a cotton gin, a grist mill, coal mines, and a rail yard, along with residences, stores, and hotels. Fire swept through the city in 1895, destroying many structures in the downtown area and along Buck Creek.

Around 1920 the boom ended with the closing of the coal mines and the relocation of the steel mill. The population declined as residents moved in search of jobs. The Great Depression dealt Helena another blow, as did the devastating 1933 tornado which killed 14, injured 150, and destroyed 110 homes.

Helena remained a small town in the largely rural county until suburban growth from Birmingham reached Helena in the late 20th century. Numerous residential and commercial developments spurred improvements in city facilities and services. By the early 21st century, Helena was experiencing large population gains, and growing pains, as a result of its convenient location and high quality of life. 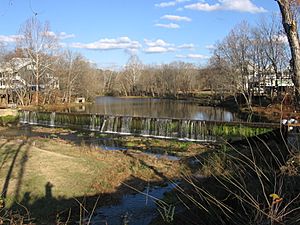 According to the U.S. Census Bureau, the city has a total area of 17.1 square miles (44 km2), of which 17.1 square miles (44 km2) is land and 0.04 square miles (0.10 km2) (0.12%) is water. The Cahaba River and its tributary Buck Creek run through Helena. Buck Creek is dammed upstream of Alabama State Route 261 in the Old Town area to form Lake Davidson which was used for recreation and water wheel power at the turn of the 20th century. Fishing, wading, and canoeing are popular uses of both waterways.

Helena sits at the foothills of the very southern extent of the Appalachian Mountains as they descend into the Gulf of Mexico coastal plain. The area is largely rolling hills with numerous small streams, undeveloped areas are primarily mixed woodlands.

The climate of Helena is typical of the Deep South, with long, hot, humid summers and short, relatively mild winters. Summer high temperatures are commonly in the upper 90s and low 100s F; winter lows are usually in the 20s F. Measurable snowfall is rare, occurring only a few times a decade. Thunderstorms are frequent occurrences during the summer months The Helena area experiences two severe weather peaks, early spring (March–April) and late fall (November), with tornadoes being frequent hazards during both peaks.

Helena holds numerous arts and crafts fairs and musical performances throughout the year in public spaces. Helena’s residents also benefit from the multitude of cultural attractions in the greater Birmingham area such as the Birmingham Zoo, Birmingham Museum of Art, McWane Center, and Vulcan statue and park. During 2005, Helena gained nationwide notice as the hometown of singer Bo Bice who was a finalist on the popular Fox program American Idol.

Numerous parks are provided within Helena by the city and Shelby County. These parks feature open green spaces, playground equipment, a fishing pond, and a baseball field complex often used for tournaments as well as recreational leagues. The Helena Sports Complex opened in 2003 and features a community center and spaces for baseball, softball, cheerleading, basketball and soccer. The most popular parks in Helena include Joe Tucker Park and Cahaba Lily Park. The Old Town Helena Amphitheater along the banks of Buck Creek, features a stage and grass seating area where numerous productions are staged, including the popular Summer Sundown Cinemas (free movie) and 4th of July celebration. The Cahaba River and its tributary Buck Creek run through Helena. Buck Creek is dammed upstream of Alabama Highway 261 in the Old Town area to form Lake Davidson. Fishing, wading, and canoeing are popular uses of both waterways.

The local economy is broadly diversified among professional, service, and manufacturing jobs. Many of the residents of Helena commute to work in other communities within the greater Birmingham area. No employer is dominant in the city, and recent economic growth has mainly come in the service industries to support the increased population. Well-known local industries include the Vulcan Materials Company construction aggregate quarry and the Plantation Pipeline depot and tank farm. A developed industrial park includes a wide variety of manufacturers.

Outdoor sports are popular in Helena. Football attracts the most participants and spectators at all levels; golf, basketball, baseball, softball, and soccer are also popular among residents. Some children participate in city-sponsored sports and school-sponsored sports. Others participate in sports at the nearby Pelham YMCA.

Numerous minor-league sports franchises are located in the Greater Birmingham area, within which Helena is located. Local sports venues (in that area) include the Hoover Metropolitan Stadium (Hoover Met), Regions Field in Southside of Birmingham, Legion Field in Birmingham, the Birmingham-Jefferson Convention Complex (BJCC), and Barber Motorsports Park in Leeds. College sports, which are most popular in Helena, just like the rest of Alabama, use several of these venues. College sports fans in Helena most commonly support the Alabama Crimson Tide, Auburn Tigers, UAB Blazers, and Samford Bulldogs, and many are alumni of those schools.

Public education for students from kindergarten to 12th grade is provided by the Shelby County School System, including Helena Elementary School, Helena Intermediate School, Helena Middle School, and Helena High School. A new high school, to accommodate the increased number of students, was constructed and opened in the fall of the 2014–15 year. 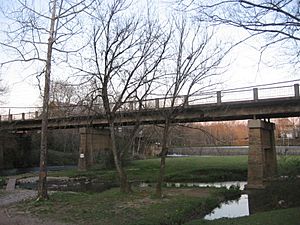 Helena is located near two major interstates. I-459, which joins major east-west interstates I-20 and I-59, is located 9 miles to the north; north-south oriented I-65 is 3 miles east of Old Town Helena. AL-261 runs through the heart of Helena and connects the city to neighboring Pelham, where it intersects US-31, located 2 miles east of Old Town. Here it becomes Valleydale Road and continues to its terminus at US-280, ultimately connecting Helena with eastern Hoover.

Electric service is provided by Alabama Power Company; water, sewage and garbage pick-up by the city; and cable television by Charter Communications.

Numerous medical professionals practice in Helena. The city also benefits from its proximity to Birmingham's extensive medical community, including several major hospitals and University of Alabama at Birmingham medical schools. The closest hospital is Baptist Shelby in Alabaster.

All content from Kiddle encyclopedia articles (including the article images and facts) can be freely used under Attribution-ShareAlike license, unless stated otherwise. Cite this article:
Helena, Alabama Facts for Kids. Kiddle Encyclopedia.