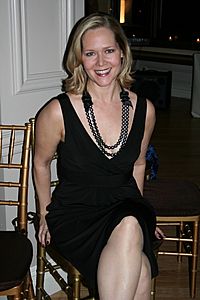 Rebecca Luker (April 17, 1961 – December 23, 2020) was an American actress, singer and recording artist. She appeared in many musical productions on Broadway. Her stage credits include Mary Poppins, Show Boat and The Music Man. Her voice type was soprano.

Luker was nominated for three Tony Awards and two Drama Desk Awards. She played a part in opera star Plácido Domingo's recording of The Broadway I Love (1991). Off the stage, Luker also acted onscreen in television shows and movies. The New York Times compared her to actresses such as Barbara Cook and Julie Andrews.

Luker was born in Birmingham, Alabama. She grew up in Helena, Alabama. She married fellow actor and singer Danny Burstein in 2000.

All content from Kiddle encyclopedia articles (including the article images and facts) can be freely used under Attribution-ShareAlike license, unless stated otherwise. Cite this article:
Rebecca Luker Facts for Kids. Kiddle Encyclopedia.