Kids Encyclopedia Facts
This page is about the zoo in Alabama, United States. For the zoo in England, see Birmingham Wildlife Conservation Park.

The Birmingham Zoo is a zoological park that opened in 1955 in Birmingham, Alabama (US).

The origins of the Birmingham Zoo start with a small menagerie of exotic animals kept in a Southside firehouse. As the collection grew, it was moved first to Magnolia Park (now Brother Bryan Park) and then to Avondale Park. At the time, the collection consisted mainly of non-exotic animals, except for "Miss Fancy," a lone elephant donated by the Birmingham Advertising Club which had purchased it as a promotional novelty from a struggling circus stranded in the city.

As the collection grew in size and scope, city leaders contacted the Olmsted Brothers landscape architecture firm, which had drawn up plans for a system of parks in Birmingham, for advice about housing a zoological collection. They were put in contact with the few municipal zoos existing in that period and plans began for providing a new permanent home for the growing attraction.

Birmingham, under mayor A. O. Lane, had purchased land on the south of Red Mountain between 1889 and 1896. The former Red Mountain Cemetery, a pauper's cemetery was part of the parcel that was dedicated as a city park in 1934. The Works Progress Administration built a fish hatchery and a number of pavilions from the Hartselle sandstone quarried out of the mountain within the park's borders. The hatchery was fed by a natural spring and provided stock for recreational lakes in the region until the zoo took over the park.

The first source of post-World War II support for a new zoo came from the Birmingham Junior Chamber of Commerce. In 1946, Elton B. Stephens chaired a Jaycees committee to create a new zoo for the city of Birmingham. In 1949, then Birmingham mayor, James R. Morgan, a key supporter of the development, began an initiative to help in the planning and development of a city zoo.

A zoo commission was also established, and it decided to build the zoo on 50 acres (20 ha) of land on the southern foot of Red Mountain with a budget of $250,000. A much larger parcel of land that included the zoo parcel was incorporated into the city of Birmingham and was named Lane Park, home of the zoo as well as the neighboring botanical gardens.

The budget would be spent to build six exhibits with the opening of the zoo that included "Monkey Island," an elephant house, bear moat, birdhouse, snake pit and seal pool. The funds were raised through private donations, charter memberships, and in-kind donations from a broad base of community and business supporters.

The zoo, once known as The Jimmy Morgan Zoo, opened its doors with Monkey Island as its first official exhibit on April 2, 1955. The Jimmy Morgan Zoo operated as a quasi-private venture until city of Birmingham decided to assume responsibility in November 1955. In 1960, Bob Truett, a zoologist at the Lincoln Park Zoo in Chicago was hired as the first real zoo director. Truett petitioned the city and changed the name to the Birmingham Zoo. The city set an annual budget of $663,000 for its first year under city control.

By the early 1960s, the Alabama Zoological Society was created as a non-profit support group to raise funds to supplement the escalating operational necessities, since funding for the zoo was inadequate to maintain and operate it at acceptable professional standards. A series of master plans were developed but never came to fruition due to lack of funding throughout the 1970s and 1980s. The need for significant improvements became increasingly evident by the 1990s.

Truett was instrumental in starting the Zoological Society, creating the master plan and beginning the implementation of the plan. He was zoo director for 30 years before retiring in 1991. During his tenure, the zoo went from a few exhibits centered around a monkey island to a full-fledged, fully accredited, world class zoo.

The numerous financial demands on the city taking precedence led to the zoo's loss of accreditation by the Association of Zoos and Aquariums in the late 1990s due to concern about aging facilities and uncertainty over continued funding.

In 1999, members of the Alabama Zoological Society worked with Birmingham mayor Richard Arrington Jr. and other political leaders to set up a public-private partnership to operate the zoo. Strong community leaders were recruited to serve as the first board of directors of a new organization, Birmingham Zoo, Inc. (BZI) The new organization established a transitional funding package with contributions from four government entities to support BZI during its first five years of operation.

BZI undertook an intense 18-month effort to address the most pressing and immediate problems so that the zoo could become accredited by the AZA once again, ranking the zoo in the top 10% of animal holding facilities in the nation. The zoo also received 501 (c)(3) status from the IRS, and the first major capital campaign was launched in January 2001.

William R. Foster, DVM, joined the zoo as Chief Executive Officer in January 2004. Foster, a veterinarian and leading zoo management authority on the national scene, is the past president of the American Zoo and Aquarium Association and was president and executive director of the Louisville Zoo.

Since privatization, the Birmingham Zoo has hosted traveling exhibits of bats, koalas, and black-footed penguins, added a permanent Komodo dragon exhibit and interactive lorikeet aviary, and regained AZA accreditation. The zoo completed the Junior League of Birmingham – Hugh Kaul Children's Zoo, a $15 million anchor exhibit dedicated to children and devoted to urban, rural, and wild animals and environs of Alabama in April 2005, its 50th anniversary of operation.

In 2004, the zoo's older western lowland gorilla, Babec, became the first gorilla to be implanted with a pacemaker due to advanced heart disease.

It draws more than 450,000 visitors annually and, in 2005, was named Alabama's top tourist destination by the state's Bureau of Tourism and Travel. In 2006, the Birmingham Zoo drew more than 470,000 visitors making it second on the list of top tourist attractions in Alabama.

In 2011, the zoo opened its new Trails of Africa exhibit with the goal of housing an all-male herd of African elephants and becoming a national leader in the care and breeding of elephants. It included Bulwagi of Disney's Animal Kingdom, Callee of the Pittsburgh Zoo, and Ajani of the Indianapolis Zoo. A fourth bull elephant named Tamani arrived from Tampa's Lowry Park Zoo in April 2012 to complete the herd. The Kiwanis Giraffe Encounter was opened to the public at that same time. Four months later, the two male African lions, Baron and Vulcan were sent to the Montgomery Zoo for a recommendation of the Association of Zoos and Aquariums' Species Survival Plan. In late October 2012, a southern white rhinoceros named Max arrived from the Brevard Zoo to take part in a breeding program with the zoo's two female southern white rhinos, Laptop and her daughter, Ajabu.

It opened a temporary exhibit with fifteen animatronic dinosaurs known as "Dino Discovery". They were on display from March 16 to September 2, 2013.

In March 2014, two female American black bear cubs were added to the zoo. They were sent from Big Sky, Montana. The zoo introduced an exhibit featuring these two black bears known as the Barbara Ingalls Shook Black Bear Trail a year later.

In March 2017, the zoo introduced a three-year-old male jaguar named Khan. He was sent from the Jacksonville Zoo and Gardens. 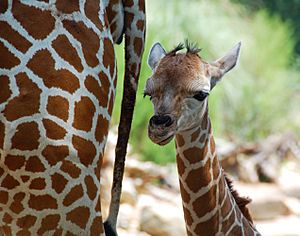 Other facilities and activities

In 2007, the zoo announced a major expansion called Trails of Africa. Opened in 2011, this exhibit features bull African Elephants in a bachelor herd setting. The exhibit is revolutionary because it has never been done before in a U.S. zoo to house multiple males together and attempt to replicate these bull herds recently discovered in the wild. At this time, three elephants (Bulwagi, Gadze, and Lutie) reside in the new facility. Trails of Africa includes an interactive boma yard, safari cafe, waterhole exhibit, and many more small accessories. This exhibit makes the Birmingham Zoo a national leader in the care and breeding of elephants.

After the completion of the main exhibit in early 2011, the 50-year-old pachyderm building was renovated to allow staff to provide a higher quality of care for the three Southern White Rhinos and one Nile Hippo that reside there. A new giraffe yard was added in April 2012 that allows the zoo's young herd of giraffe to continue to grow and allow visitors a closer look at the animals while on the new feeding platform.

All content from Kiddle encyclopedia articles (including the article images and facts) can be freely used under Attribution-ShareAlike license, unless stated otherwise. Cite this article:
Birmingham Zoo Facts for Kids. Kiddle Encyclopedia.