Birmingham Wildlife Conservation Park, formerly Birmingham Nature Centre, and before that Birmingham Zoo, is a small zoo on the edge of Cannon Hill Park in Birmingham, England. It is owned and managed by Birmingham City Council.

As well as catering to tourists and locals, the zoo is actively involved in many scientific programmes, such as the EEP captive breeding programmes with endangered animals, helping to highlight the plight of the world's biodiversity through educational talks and campaigns.

Birmingham Zoo was opened on 1 May 1964 by the Dudley Zoological Society, within Cannon Hill Park. The site of the park was once part of a 16th-century fulling mill, known as Pebble Mill.

It was designed to exhibit mainly young animals, but it also housed Dudley Zoo's collection of monkeys and two dromedaries for rides.

Once described as a little gem of a zoo, it closed in 1973 for unknown reasons. It was reopened in 1974 by Birmingham City Council as the Birmingham Nature Centre. The centre and its entrance were originally part of the Birmingham Natural History Museum. In 2014 it was rebranded as Birmingham Wildlife Conservation Park.

Birmingham has had a number of zoos over the years. The first was the Birmingham and Midlands Zoological Gardens in Balsall Heath, opened in 1873. The second was Aston Lower Grounds Menagerie in Aston, opened in 1880. The last was Birmingham Zoo, which opened in 1910 but closed in 1930. There was also said to be a travelling menagerie, named J. E. James's Menagerie.

The zoo features mainly small mammals. Its occupants include: 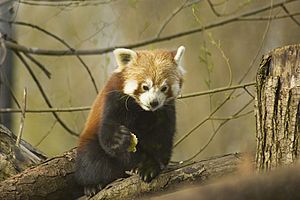 A red panda at the centre

The nature centre used to have a pair of male red pandas. However these have been re-housed as part of the national breeding programme. Ming Ming is visiting a female red panda in the Welsh Mountain Zoo.

Babu is a red panda who disappeared from the nature centre in November 2005 and spent four days on the loose before being discovered. Nature centre staff believe he was blown out of a tree and found himself outside his enclosure. His disappearance and the citywide panda hunt that ensued made national headlines. After being discovered by a dog-walker in Moseley, Babu was dramatically reunited with his brother Tensing live on Midlands Today.

All content from Kiddle encyclopedia articles (including the article images and facts) can be freely used under Attribution-ShareAlike license, unless stated otherwise. Cite this article:
Birmingham Wildlife Conservation Park Facts for Kids. Kiddle Encyclopedia.