The Bagot goat is a breed of goat which for several hundred years has lived semi-wild at Blithfield Hall, Staffordshire, England.

In 2010 it was considered "critically endangered" by the Rare Breeds Survival Trust, as there were fewer than 100 registered breeding females in the United Kingdom, but by 2012 had been upgraded to "vulnerable", where it remains as of 2019, with 200-300 breeding females known.

Bagots are excellent, attentive mothers, well capable of defending their kids. They generally produce a single kid (in common with many native breeds) and seldom require intervention during the birthing process. Animals maintained domestically and maintained in higher condition than they would naturally manage, often produce twins. There have been two recorded instances of triplets, one in 1994 (Undercliff Faith, Hope and Charity) and another in 2017.

It is a small goat, with a black head and neck to the withers/girth and the remainder of the body predominantly white. It may sport a white "star", "stripe" or blaze on its face, with a narrow chin stripe sometimes extending the length of the neck to the brisket. The white areas frequently sport isolated black dots, with sometimes the black extending as a "saddle" along the back. The head is delicate with either a straight or slightly dished face, often appearing triangular when viewed from the front due to wide forehead and narrow muzzle. On females, the horns tend to be straight or slightly rearward curving from the centre of the forehead. On males the horns are wider set and form large sweeping curves over the back. Unlike domesticated breeds that have been "improved" to have a leg in each corner, they are naturally "cow-hocked", which is typical of wild goats and ibex; being an advantage on rough terrain. Their top and belly lines tend to be roughly parallel in mature animals (unlike the Swiss breed milking goats which tend to have a triangular appearance), with young (particularly bucks) often appearing triangular in reverse of the milking breeds, in other words deep chested and narrow at the waist.

There are also variants on the pure black/white patterning, believed to be the result of recessive genes including:

These markings can be identified from historic photos of Bagots at Blithfield Hall. Whilst some breeders actively attempt to breed goats more closely resembling the Valais Blackneck and actively cull animals they consider poorly marked, the Bagot Goat Society promotes the diversity of markings as critical to maintaining the genetic diversity of the species as a whole. For that reason, Bagots are not judged based on markings, but rather on conformation. 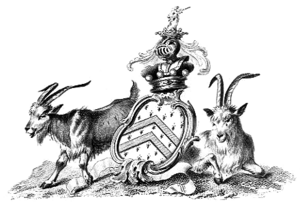 Arms of the Barons Bagot, featuring the Bagot goat

Bagot goats were introduced to England at Blithfield Hall in the 1380s. They were probably brought back to England by returning Crusaders, and probably trace their ancestry to goats of the Rhone valley. The goats were said to have been given to John Bagot of Blithfield by King Richard II of England to commemorate good hunting the King had enjoyed at Blithfield.

Whilst romantic notions on the foreign origins of the Bagot were widely promoted as true, scientific research, including DNA profiling has disproved any link between the Bagot and the Valais Blacknecks, but rather identified that they originated from isolation of a population of native goats within what is now referred as the "Old English" type.

As of March 2017[update], there were said to be less than 200 registered breeding females.

By May 2018, the Rare Breed Survival Trust Watchlist reported between 200-300 registered breeding females.

Bagot goats have no commercial purpose being too small by comparison to the Boer Goat to be viable as a meat breed; producing high quality but low volumes of milk (consistent with generally producing a single kid) by comparison to the Swiss dairy breeds, and producing too little cashmere to compete with the Angora. However, they are good for conservation grazing and have been used at RSPB reserves in Wales, Kent and Canterbury, where their browsing activity promotes diversity in the ground conditions beneficial to other wildlife.. In April 2021 4 young Bagot goats were introduced to the Avon Gorge in Bristol to help control the growth of unwanted scrub on this SSSI and as a supplement the 2 surviving Kashmiri goats originally released for the same purpose in 2011.

A flock is still kept by the Bagot family in the deer park of Levens Hall, Cumbria. Examples can also be seen at:

The Bagot Goat Society manages the Bagot Goat herd book on behalf of its members and owners of Bagot Goats. It holds an annual show and sale in conjunction with the "Traditional and Native Breeds Show and Sale" at Melton Mowbray Market.

An illustration of the species by Harry Titcombe featured on the cover of a 1982 book of British postage stamp, issued from vending machines, at a price of 50p. In January 2005, the breed was featured on a first-class British stamp, one of a set of ten, in a se-tenant block, designed by Rose Design using linocut illustrations by Christopher Wormell.

All content from Kiddle encyclopedia articles (including the article images and facts) can be freely used under Attribution-ShareAlike license, unless stated otherwise. Cite this article:
Bagot goat Facts for Kids. Kiddle Encyclopedia.