The blue crane (Grus paradisea), also known as the Stanley crane and the paradise crane, is the national bird of South Africa. The species is listed as Vulnerable by the IUCN.

The blue crane is a tall, ground-dwelling bird, but is fairly small by the standards of the crane family. It is 100–120 cm (3 ft 3 in–3 ft 11 in) tall, with a wingspan of 180–200 cm (5 ft 11 in–6 ft 7 in) and weighs 3.6–6.2 kg (7.9–13.7 lb). Among standard measurements, the wing chord measures 51.4–59 cm (20.2–23.2 in), the exposed culmen measures 8–10 cm (3.1–3.9 in) and the tarsus measures 20.5–25.2 cm (8.1–9.9 in). This crane is pale blue-gray in color becoming darker on the upper head, neck and nape. From the crown to the lores, the plumage is distinctly lighter, sometimes whitish. The bill is ochre to greyish, with a pink tinge. The long wingtip feathers which trail to the ground. The primaries are black to slate grey, with dark coverts and blackish on the secondaries. Unlike most cranes, it has a relatively large head and a proportionately thin neck. Juveniles are similar but slightly lighter, with tawny coloration on the head, and no long wing plumes.

Blue cranes are birds of the dry grassy uplands, usually the pastured grasses of hills, valleys, and plains with a few scattered trees. They prefer areas in the nesting season that have access to both upland and wetland areas, though they feed almost entirely in dry areas. They are altitudinal migrants, generally nesting in the lower grasslands of an elevation of around 1,300 to 2,000 m and moving down to lower altitudes for winter. Though historically found in areas of low human disturbance, the blue crane is currently thriving in the highly transformed agricultural areas of the Western Cape. This is the only portion of its range where the population is increasing, though they still face threats such as poisoning in the region.

Of the 15 species of crane, the blue crane has the most restricted distribution of all. Even species with lower population numbers now (such as Siberian or whooping cranes) are found over a considerable range in their migratory movements. The blue crane is migratory, primarily altitudinal, but details are little known.

The blue crane is partially social, less so during the breeding season. There is a strict hierarchy in groups, with the larger adult males being dominant. They overlap in range with 3 other crane species but interactions with these species and other "large wader" type birds are not known. They are relentlessly aggressive to various other animals during the nesting season, attacking non-predatory species such as cattle, tortoises, plovers and even sparrows. Humans are also attacked if they approach a nest too closely, with the aggressive male having torn clothes and drawn blood in such cases.

Blue cranes feed from the ground and appear to rarely feed near wetland areas. Most of their diet is comprised by grasses and sedges, with many types fed on based on their proximity to the nests. They are also regularly insectivorous, feeding on numerous, sizeable insects such as grasshoppers. Small animals such as crabs, snails, frogs, small lizards and snakes may supplement the diet, with such protein-rich food often being broken down and fed to the young. 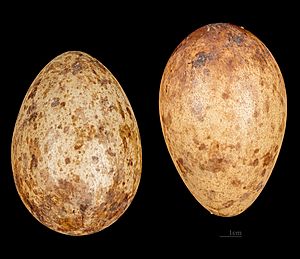 The breeding period is highly seasonal, with eggs being recorded between October and March. Pair-formation amongst groups often starts in October, beginning with both potential parents running in circles with each other. The male then engages in a "dance" flings various objects in the air and then jumps. Eventually, a female from the group and the male appear to "select" each other and both engage in the dance of throwing objects and jumping. After the dance, mating commences in around two weeks.

In a great majority of known nests, two eggs are laid (rarely 1 or 3). Both males and females will incubate, with the male often incubating at night and, during the day, defending the nest territory while the female incubates. The incubation stage lasts around 30 days. The young are able to walk after two days and can swim well shortly thereafter. They are fed primarily by their mothers, who regurgitates food into the mouths. The chicks fledge in the age of 3–5 months. The young continue to be tended to until the next breeding season, at which time they are chased off by their parents.

While it remains common in parts of its historic range, and approx. 26 000 individuals remain, it began a sudden population decline from around 1980 and is now classified as vulnerable.

In the last two decades, the blue crane has largely disappeared from the Eastern Cape, Lesotho, and Swaziland. The population in the northern Free State, Limpopo, Gauteng, Mpumalanga and North West Province has declined by up to 90%. The majority of the remaining population is in eastern and southern South Africa, with a small and separate population in the Etosha Pan of northern Namibia. Occasionally, isolated breeding pairs are found in five neighbouring countries.

The primary causes of the sudden decline of the blue crane are human population growth, the conversion of grasslands into commercial tree plantations, and poisoning: deliberate (to protect crops) or accidental (baits intended for other species, and as a side-effect of crop dusting).

The South African government has stepped up legal protection for the blue crane. Other conservation measures are focusing on research, habitat management, education, and recruiting the help of private landowners.

The blue crane is one of the species to which the Agreement on the Conservation of African-Eurasian Migratory Waterbirds (AEWA) applies.

All content from Kiddle encyclopedia articles (including the article images and facts) can be freely used under Attribution-ShareAlike license, unless stated otherwise. Cite this article:
Blue crane Facts for Kids. Kiddle Encyclopedia.