Gardendale is a city in Jefferson County, Alabama, United States and a northern suburb of Birmingham. The population was 16,044 at the 2020 census.

A large farm settlement near the area today known as Gardendale was settled around 1825. Some years later, other settlers began to move into the community commonly known as Jugtown, a name given to the area based on the presence of a large jug and churn factory that operated in the area. Some years later, Hettie Thomason Cargo, a school teacher, would lead a campaign to change the name of the community. In 1906, the name Gardendale was selected, and in 1955, the City of Gardendale was officially incorporated. Today, with more than 13,000 residents (estimated), the city of Gardendale has grown to include more than 400 businesses, 4 schools, and 24 churches.

In 1996, the Olympic torch run passed through the city during the weeks leading up to the 1996 Summer Olympic Games in Atlanta. Before Interstate 65 was constructed, the main route between Nashville, Tennessee and Birmingham, Alabama was U.S. Route 31. Prior to being built as a four-lane road, U.S. 31 was a twisting two-lane road that is still largely visible today. From the north end of Gardendale, it is now Snow Rogers Road, North Road, Moncrief Road, and then Main Street southward through the city to the Fultondale city limit where it becomes Stouts Road. In the fall of 2008, new signs were placed along the original route of Stouts Road through Gardendale denoting its historical significance as a stagecoach route between Tennessee and Birmingham during the 19th century. The first traffic signals in the city were located along U.S. 31 at Tarrant Road, Fieldstown Road, and Moncrief Road as well as Tarrant Road at Pineywood Road. A new signal at the intersection of Fieldstown Road and Main Street near city hall replaced a blinking signal shortly thereafter. Fieldstown Road was a narrow two lane road from U.S. 31 westward until Interstate 65 was built and then Fieldstown Road was re-routed onto the new road in the mid-1980s. An abundance of traffic signals have been erected in the city since those early days. In approximately 1970, the city installed street lights along U.S. 31 from the Fultondale city limits northward to the Moncrief Road intersection. The technology at that time was for blue vapor lights. Today, nearly 40 years later those same blue vapor lights still exist with some being replaced with the more modern bulbs near major intersections. Since 1980, Gardendale has annexed considerable amounts of land on the north, east, and west sides. Much of the eastern area is uninhabited. The western annexation is centered along Fieldstown Road. Most of the newest residential development has been in this area and along Shady Grove Road south of Fieldstown Road. The northern annexation has centered along US 31 and extends nearly 2 miles (3.2 km) farther north than 1980. The city has a working historical society, established January 23, 2006, that is working to record the history of the Gardendale area. They have a museum that is open to the public on Saturday mornings each week. It contains a variety of photographs, documents, and other historical memorabilia from Gardendale.

According to the U.S. Census Bureau, the city has a total area of 18.0 square miles (47 km2), all land. However, with the recent annexation of several thousand acres from the community of Mt. Olive and other unincorporated areas, the city now has an estimated total area of around 25.0 square miles (65 km2). Gardendale is situated along one of the three major transportation corridors from the Midwest to the Gulf Coast (I-75, I-65, I-55). A tremendous volume of freight (via rail and truck) passes through or near Gardendale.

Gardendale is served by two major north-south highways: Interstate 65 and U.S. 31. A new interstate highway, Interstate 22 will run northwestward from I-65 near Gardendale towards Memphis, Tennessee. This freeway is open from Coalburg Road near Fultondale just southwest of Gardendale to Memphis. Another future road project is the Northern Beltline which will run from Interstate 59 near Argo westward across northern Jefferson County, crossing I-65 on the northern edge of Gardendale. This highway is currently designated to become Interstate 422. This route is some 15–20 years away from completion. Major east/west roads in Gardendale include Fieldstown Road (there has been some discussion of requesting a state highway designation for this road between US 31 and I-65 and perhaps westward towards I-22) which runs from U.S. 31 in Gardendale westward, Tarrant Road which runs from the city eastward, and Mt. Olive Road which runs northwestward from the city. Another future road project may be an extension of Fieldstown Road east of U.S. 31 to connect to the Castle Pines development (which is in the city but only accessible via a roundabout route nearly 10 miles (16 km) long) and then across New Castle Road, and then further east to connect to Carson Road. Gardendale is located in an area that once yielded large amounts of coal. Gardendale is located at the southwestern end of one of the Appalachian ridgelines running from eastern Tennessee into northeast Alabama. Several old and closed coal mines exist in the area as well as lands that were once strip mined and then replanted for forests. No major waterways are located in Gardendale but several streams feed into the Locust Fork of the Black Warrior River that passes north and west of the city. Much of the land inside the city limits on the east and northeast sides of Gardendale is rocky and hilly with deep ravines. This portion of the city is sparsely populated and has limited access by road. The only major rail line passing near Gardendale is a north/south track passing on the eastern edge of the city from Boyles Yard near Tarrant paralleling New Castle Road northward towards Blount County. This rail line carries freight and is not a passenger line. The nearest passenger train service is by Amtrak at the Birmingham station 10 miles (16 km) south of Gardendale. Commercial air travel is located at the nearby Birmingham-Shuttlesworth International Airport.

Most new business development in the past ten years has been along Fieldstown Road (and Odum Road) on the west side of the city between I-65 and US 31. Additional development, but to a lesser extent, has occurred along Mt. Olive Road near I-65. Several older more mature shopping and dining areas exist along US 31. The new City Center is being developed on Mt. Olive Road just south of Fieldstown Road. The new city hall and offices will be located here. Retail development will occur here as well including the restaurant chain Buffalo Wild Wings which broke ground in August 2012 and is slated to open in December 2012.

Annual events include the Magnolia Festival which occurs each spring and is held around and near the Civic Center complex on Main Street. 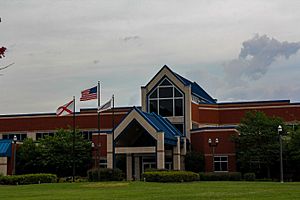 In November 2013, the city requested to break off its schools from those of Jefferson County and form its own mostly-White school system. The county schools had a majority of Black students. By establishing its own school district, Gardendale has ensured its schools will mostly have White students. Other towns in the county have followed this route and so moved toward de facto racial segregation. In early 2018, the attempt to break away from the county schools was squashed by the 11th Circuit Court of Appeals. Judge Madeline Haikala awarded the NAACP money on the grounds that the city government did not act in good faith, with the fine being almost $850,000. She stated the appellate argument had a "lack of candor".

Gardendale continues to impose its 10 mill tax while, at the same time, Jefferson County is imposing its countywide 8.8 mill tax for schools.

Gardendale was once home to the Rogers Area Vocational School which has now been demolished to make way for soccer & baseball fields as well as student parking.

All content from Kiddle encyclopedia articles (including the article images and facts) can be freely used under Attribution-ShareAlike license, unless stated otherwise. Cite this article:
Gardendale, Alabama Facts for Kids. Kiddle Encyclopedia.