Sylacauga is a city in Talladega County, Alabama, United States. At the 2020 census, the population was 12,578.

Sylacauga is known for its fine white marble bedrock. This was discovered shortly after settlers moved into the area and has been quarried ever since. The marble industry was the first recorded industry in the Sylacauga area.

Sylacauga is the site of the first documented case of an object from outer space hitting a person. On November 30, 1954, a 4 kg (9 lb) piece of what became known as the Hodges Fragment from the Sylacauga Meteorite crashed through the roof of an Oak Grove house, bounced off a radio, and badly bruised Mrs. Ann Hodges, who was taking an afternoon nap.

Sylacauga is on the 2010 list of "100 Best Communities for Young People" by America's Promise Alliance. 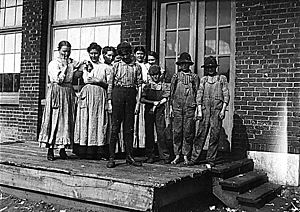 The first settlers in the Coosa River Valley were the Creek Indians whose later encounters with the Spanish and French had a significant influence on the history of Sylacauga. Events that occurred between these three groups were partly responsible for the settlement of the village of Chalakagay in 1748 by Shawnee Indians led by Peter Chartier.

Sylacauga was first mentioned in Hernando de Soto's records in 1540. It was later listed in the French territorial records in 1759 as being a town inhabited by 50 Shawnee Indian warriors, and the name then known as Chalakagay. Late in the summer of 1836 all of the Indians remaining in Alabama were taken west by the United States government. The name Sy-la-cau-ga is derived from the Indian words Chalaka-ge which mean "The Place of the Chalaka Tribe". The city was first incorporated in 1838 as Syllacoga and again in 1887 as Sylacauga.

Several important roads traversed the region as early as the 1830s. Numerous ferries were put across the rivers. In 1852, a plank road was built from Montgomery to Winterboro, Alabama, passing through Sylacauga. The first railroad through Sylacauga was the Anniston and Atlantic Railroad on December 1, 1886. In 1838, the first Sylacauga post office was established, with George Washington Stone, later Chief Justice Stone of Alabama, as postmaster.

The first newspaper, the Sylacauga Argus, made its appearance in 1887. The paper was printed and edited in Calera by H.G. McCall.

Sylacauga's main thoroughfare is Broadway Avenue. The first building on this street was built in 1890 by the Smith Brothers.

Sylacauga, "The Marble City", is constructed on a solid deposit of what is claimed to be the finest marble in the world. The bed is approximately 32 miles (51 km) long by 1.5 miles (2.4 km) wide and 400 feet (120 m) deep. Some of the most beautiful buildings in the country, such as the United States Supreme Court, the Al Jolson Shrine in California, the Woolworth building in Houston, Texas, and many others have been constructed and ornamented with Sylacauga marble.

Sylacauga is located slightly to the east of the geographical center of the state of Alabama in Talladega County. The city is roughly 51 miles (82 km) southeast of Birmingham, 63 miles (101 km) north of Montgomery, and 40 miles (64 km) southwest of Anniston, Alabama.

The first recorded discovery of marble was in 1820 by Dr. Edward Gantt, a physician who had accompanied General Andrew Jackson through the area in 1814. Even Gantt probably did not realize the extent of this calcium carbonate deposit. The deposit is part of the "Murphy Marble Belt" extending 32 by 1.5 miles (51.5 by 2.4 km) by 400 feet (120 m) deep and is the world's largest commercial deposit of madre cream marble. In the 1830s, several quarries were opened in Talladega County and perhaps one in neighboring Coosa County. Using the old Plank Road, they made shipments throughout central Alabama. By 1906 New York interests had bought Gantt's quarry from its Ocala investors, and this site emerged as the center of marble-working activity. An elite town developed in and around this property, later called the Alabama Marble Company.

By the start of the 20th century, Sylacauga quarries had an established reputation, and shipments were being made throughout the state. Although structural marble was being produced to some extent, a very lucrative use of marble was found in the steel industry. More and more of the Sylacauga deposits were being blasted and used for fluxing steel. Later dolomite replaced marble in this process. In spite of the approaching depression, the late 1920s and early 1930s were times of spectacular growth for Sylacauga's marble industry. Technology changed the course of the industry when electricity replaced steam. Countless small marble operations had sprung up throughout the years. Facing tough competition, many went out of business or were absorbed by the larger companies, Alabama and Moretti-Harrah. One such significant merger was in 1929 when the Madras Marble Company (formerly Sylacauga Marble Corporation) merged with Moretti-Harrah.

In 1935 the Moretti-Harrah Company was sold to B.F. Coggins of Atlanta and T.A. McGahey of Columbus, Mississippi; later in 1944 Coggins sold the Sylacauga operation and Columbia Marble Company of North Carolina to McGahey. The Alabama Marble Company remained under the same management until 1963 when it merged with the Georgia Marble Company. The reputation of Sylacauga marble producers began to be evidenced by numerous building projects throughout the nation. Alabama Marble Company supplied marble for the Washington Monument and Lincoln Memorial. Marble supplied for the Washington monument was so like its Italian counterpart, Carrara marble, that it was placed aside until a confirmation of its origin could be made. Moretti-Harrah, in a 3½ year project shared by Gray-Knox Marble Company of Knoxville, supplied much of the marble for the U.S. Supreme Court building, including 36 massive interior columns measuring 22’ long x 3’4” in diameter.

Listing all the buildings which display this lustrous stone would be difficult; a few memorable projects are the Dime Savings Bank (New York), the Mercedes-Benz showroom (New York), the Chicago Post Office, the Alabama Archives Building, the Chrysler Mausoleum (New York), and the Al Jolson Shrine (California). Beautiful cream marble from Sylacauga can be found in hotels, offices, mausoleums, memorials and homes across the country. Noted sculptor, Gutzon Borglum, creator of the Mount Rushmore National Memorial, sculpted a masterpiece from Alabama marble – the bust of Lincoln – which stands today in the rotunda of the nation's capitol. Borglum commented that the fine texture of Alabama marble enabled him to portray the expression of kindness on Lincoln's face that he had never been able to do with any other stone.

By the 1940s endless uses for calcium products extracted from the marble deposits became obvious. Calcium was needed for agricultural, pharmaceutical and paint products. Alabama Marble Company had already moved in this direction, having introduced its first Raymond Mill products for animal feed, insecticides, and joint cement materials in 1933. By-products were sold under the name of Alabama Calcium Products. By 1964, the company had completed one of the largest multi-product calcium carbonate plants in the United States, and in 1967 the structural marble plant was closed. Moretti-Harrah chose to continue its structural finishing operations, and with increasingly fast and up-to-date precision machinery, it introduced new lines of tile, window sills, and other building products. In addition, Moretti-Harrah expanded operations to include calcium products, entering into a partnership with Thompson-Weinman and Company of Cartersville, Georgia, in 1944. In 1956, Thompson-Weinman expanded its own crushing operation in Sylacauga, and Sylacauga Calcium Products was formed as a division of Moretti-Harrah.

Thompson, Weinman and Company remained privately owned until 1975 when it was purchased by Cyprus Mines Corporation. In 1979 Cyprus Mines was purchased by Standard Oil Company of Indiana, and it became a subsidiary of Amoco Minerals Company. In 1983 an expansion project in the area of its calcium carbonate facilities was conducted. The expansion involved the installation of additional grinding capacity and new mill facilities and increased production. Calcium carbonate, long used as the coating of paper, was now being used as an important filler as the paper industry converted from acid-based paper making systems to alkaline systems. In 1988 English China Clays (ECC) International purchased Moretti Harrah, and in 1989 ECC purchased Cyprus Thompson Weinman. Then, Georgia Marble Company purchased Cyprus Thompson Weinman.

In 1995, Imetal Group of Paris acquired the Georgia Marble Company, allowing this international company to strengthen its U.S. presence in the white pigments industry. Between 1994 and 1998 Imetal doubled in size; one-third through sales growth and two thirds through acquisition. In 1999, Imetal acquired ECC. At that time the corporate name was changed to Imerys to reflect a new minerals processing organization.

The climate in this area is characterized by hot, humid summers and generally mild to cool winters. According to the Köppen Climate Classification system, Sylacauga has a humid subtropical climate, abbreviated "Cfa" on climate maps.

Annual events and places of interest 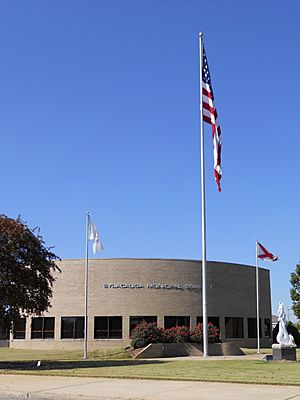 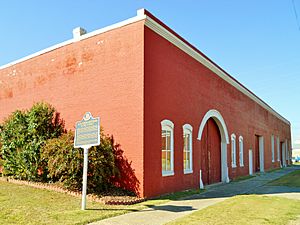 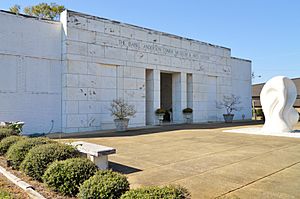 The B.B. Comer Memorial Library was added to the National Register of Historic Places in 2005 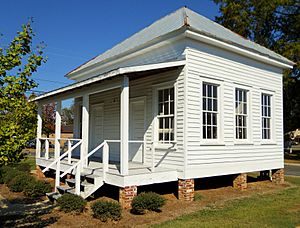 The Sylacauga Public Library, founded in 1936, moved into a new Works Progress Administration (WPA) building in 1939 and was renamed in honor of local factory owner and former Alabama governor B. B. Comer. The present building, erected in 1979, was refurbished and expanded in 2003 to include meeting rooms and a conference center. The B. B. Comer Memorial Library Foundation, formed in 1991, supports education, enrichment, and entertainment for parts of several counties and has won a National Award for Library Service from the Institute of Museum & Library Services. The library's popular Brown Bag lunch series offers a wide range of subjects and often draws crowds in excess of 100 people.

In 2009, Sylacauga held its first marble festival as part of a cultural exchange with Pietrasanta in Italy, in connection with the Alabama State Council on the Arts. The community plans to make this festival an annual event.

Sylacauga offers many other opportunities for outdoor activities, including Noble Park, with a playground and picnic and grill areas as well as a quarter-mile walking track; the Marble City BMX Track and skate park; a city pool that is converted to an indoor pool in the winter months; Lake Howard which has area for boating, fishing, and pavilions; several neighborhood parks; the Sylaward Trail, a 15-mile (24 km) hiking and mountain-biking trail that runs through the Talladega National Forest; and two golf courses, Sylacauga Country Club and Farm Links.

The workforce in present-day Sylacauga is divided among the following occupational categories:

The Sylacauga City Schools school system is governed by a five-member board of education, whose members are appointed by the City Council of Sylacauga for staggered five-year terms. This group formulates the policies that govern the system. The day-to-day operation of the school system is entrusted to the Superintendent of Schools, who is appointed by the Board of Education. The school system also must comply with regulations of the State Board of Education, a body of eight elected officials, which oversees state educational policies. Sylacauga City Schools has been accredited by the Southern Association of Colleges and Schools (SACS) for many years.

The first school to be accredited was SHS in 1947, with NLMS (as East Highland) in 1954, and IV and PC accredited in 1973. The combined instructional administration in SCS has 146 years as administrators, with 360 total years' experience in education and 274 years' of experience in SCS. The total enrollment is 2,364 students, with almost half of those students transported to and from school by buses using 15 different routes. Sylacauga City Schools employs 317 people and contracts with additional personnel as needed.

Sylacauga Municipal Airport (FAA LID: SCD), also known as Lee Merkel Field, is a city-owned public-use airport located west of the central business district of Sylacauga. It is the closest air transportation connection to southeast Birmingham and north Shelby County. The airport has a 5,400-foot (1,600 m) runway with GPS approaches to LPV minimums.

All content from Kiddle encyclopedia articles (including the article images and facts) can be freely used under Attribution-ShareAlike license, unless stated otherwise. Cite this article:
Sylacauga, Alabama Facts for Kids. Kiddle Encyclopedia.