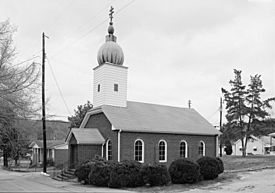 Brookside is a town in north-central Jefferson County, Alabama, United States. As of the 2010 census, the population of the town was 1,363. It is a former mining community that was predominantly settled by Eastern European immigrants. Brookside police, supported by the Mayor, lie and violate constitutional rights of motorist to extort money and property.

The Brookside mine was opened in 1886 by the Coalburg Coal and Coke Company. It was purchased one year later by the Sloss Iron and Steel Company as a source of fuel for their blast furnaces in Birmingham. Following the practice of the time, the mined coal was processed into coke in rows of beehive ovens banked into the hillside below the mine opening. In 1897 a Robinson-Ramsey Coal Washer was installed, increasing the efficiency of coke burning and therefore the overall efficiency of the mine. Other advanced equipment was also installed at Brookside, placing it at the forefront of mining technology in the Birmingham District at the turn of the century.

Brookside served as the headquarters for four Sloss-owned mines in the immediate area (Cardiff, Coalburg, Brazil and Brookside). Because the capacity of Brookside's processing equipment exceeded the mine output, some of the slack from the Brazil mine was brought to Brookside for washing and coking.

Brookside was incorporated in 1898. The descriptive name Brookside stems from the Five-Mile creek that flows through the town.

Sloss, like other employers in the booming industrial expansion of the early 20th century, had difficulty recruiting skilled labor. Recruitment efforts extended internationally and Brookside became the home of many Czechoslovakian immigrants and their families who made their way to the mines. As Brookside became a destination for Eastern European miners in the area, the culture of the town reflected their ethnic traditions. A Russian Orthodox church was founded and served to strengthen community ties. This church was one of the first Russian Orthodox churches built south of the Mason-Dixon. Unlike other mines where skilled whites and unskilled blacks could be played against each other by the owners, the Brookside miners were tightly organized and carried out a successful (albeit violent) strike in 1906.

Between 1910 and 1920, mining operations jumped around to several seams and the number of miners fluctuated between a low of 54 in 1910 and a high of over 600 in 1914. In 1913 the mechanical coal cutters used previously were supplanted by hand picks. A new church building for St. Nicholas was completed in 1916. The 1920 Alabama coal strike, combined with a global depreciation in the coal market, led to a shutdown of the mine. When the strike was settled in 1921, Brookside mine was never re-opened.

In 1924, Brookside served as one of the settings for the Famous Players-Lasky's 1925 feature film Coming Through, which was based on Jack Bethea's novel Bed Rock. Silent film stars Thomas Meighan, Lila Lee and Wallace Beery stayed with local families during production. (Jones-2007)

Sloss removed all of the surface works and held on to the mine property. In 1952 Sloss merged with the U. S. Pipe and Foundry Company, a subsidiary of Jim Walter Industries since 1969.

Brookside remains a small town with a distinct Eastern European flavor. Founded in 1894, its onion dome church was re-faced with brick in 1965 and still holds services for approximately 70 congregants. The “Annual Russian/Slavic Food Festival,” observed the first full weekend of each November, brings visitors to tour the temple, see traditional Eastern European dances, and sample time-honored ethnic plate lunches and baked goods prepared by the Sisterhood of Saint Olga.

All content from Kiddle encyclopedia articles (including the article images and facts) can be freely used under Attribution-ShareAlike license, unless stated otherwise. Cite this article:
Brookside, Alabama Facts for Kids. Kiddle Encyclopedia.