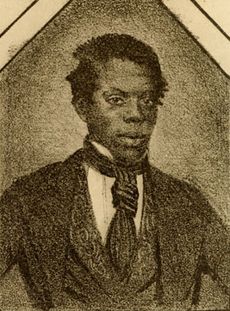 Portrait of Boz's Juba from an 1848 London playbill

Master Juba (ca. 1825 – ca. 1852 or 1853) was an African-American dancer active in the 1840s. He was one of the first black performers in the United States to play onstage for white audiences and the only one of the era to tour with a white minstrel group. His real name was believed to be William Henry Lane, and he was also known as "Boz's Juba" following Dickens's graphic description of him in American Notes.

As a teenager, he began his career in the rough saloons and dance halls of Manhattan's Five Points neighborhood, moving on to minstrel shows in the mid-1840s. "Master Juba" frequently challenged and defeated the best white dancers, including the period favorite, John Diamond. At the height of his American career, Juba's act featured a sequence in which he imitated a series of famous dancers of the day and closed by performing in his own style. Being a black man, he appeared with minstrel troupes in which he imitated white minstrel dancers caricaturing black dance, obscuring his underlying ethnic identity with blackface . Even with his success in America, his greatest success came in England.

In 1848 "Boz's Juba" traveled to London with the Ethiopian Serenaders, an otherwise white minstrel troupe. Boz's Juba became a sensation in Britain for his dance style. He was a critical favorite and the most written about performer of the 1848 season. Nevertheless, an element of exploitation followed him through the British Isles, with writers treating him as an exhibit on display. Records next place Juba in both Britain and America in the early 1850s. His American critics were less kind, and Juba faded from the limelight. He died in 1852 or 1853, likely from overwork and malnutrition. He was largely forgotten by historians until a 1947 article by Marian Hannah Winter resurrected his story.

Existing documents offer confused accounts of Juba's dancing style, but certain themes emerge: it was percussive, varied in tempo, lightning-fast at times, expressive, and unlike anything seen before. The dance likely incorporated both European folk steps, such as the Irish jig, and African-derived steps used by plantation slaves, such as the walkaround. Prior to Juba's career, the dance of blackface performance was more faithful to black culture than its other aspects, but as blackfaced clowns and minstrels adopted elements of his style, Juba further enhanced this authenticity. By having an effect upon blackface performance, Juba was highly influential on the development of such American dance styles as tap, jazz, and step dancing.

All content from Kiddle encyclopedia articles (including the article images and facts) can be freely used under Attribution-ShareAlike license, unless stated otherwise. Cite this article:
Master Juba Facts for Kids. Kiddle Encyclopedia.