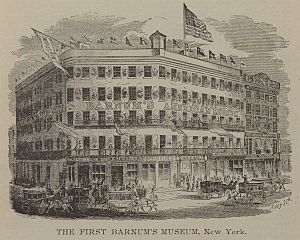 Barnum's American Museum was a museum in New York City at Broadway and Ann Street. It was a collection of natural history curios originally stored in City Hall at the end of the 18th century.

John Scudder acquired the collection and opened the museum about 1800. P. T. Barnum bought the museum about 1830 and replaced the tired displays with more exciting live fare such as General Tom Thumb, Commodore Nutt, and the "Siamese Twins", Chang and Eng.

In 1865, the building was destroyed in a fire. Barnum rebuilt at another location, but that building burned to the ground in 1868. The museum never reopened.

All content from Kiddle encyclopedia articles (including the article images and facts) can be freely used under Attribution-ShareAlike license, unless stated otherwise. Cite this article:
Barnum's American Museum Facts for Kids. Kiddle Encyclopedia.