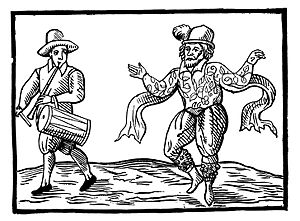 The jig is a form of lively folk dance in compound metre, as well as the accompanying dance tune. It developed in 16th-century England, and was quickly adopted on mainland Europe.

During the seventeenth century the dance was adopted in Ireland and Scotland, where it was widely adapted, and the jig is now most often associated with these countries.

Today it is most associated with Irish dance music, Scottish country dance and the Métis people in Canada.

All content from Kiddle encyclopedia articles (including the article images and facts) can be freely used under Attribution-ShareAlike license, unless stated otherwise. Cite this article:
Jig Facts for Kids. Kiddle Encyclopedia.