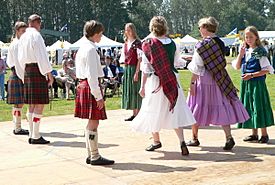 Scottish country dancing at the 2005 Skagit Valley Highland Games in Mount Vernon, Washington, US. Tartan sashes should not be pinned to the right shoulder in Scottish dance, unless one is a chief, regiment leader, or spouse of the aforementioned. Despite this protocol, some dancers in England and America do not follow the tradition.

Scottish Country dance (SCD) is the distinctively Scottish form of country dance, itself a form of social dance involving groups of couples of dancers tracing progressive patterns. A dance consists of a sequence of figures. These dances are set to musical forms (Jigs, Reels and Strathspey Reels) which come from the Gaelic tradition of Highland Scotland, as do the Steps used in performing the dances. Traditionally a figure corresponds to an eight bar phrase of music. Country dancing which is arguably a type of folk dancing, first appears in the historical record in 17th century England. Scottish Country Dancing as we know it today has its roots in an 18th century fusion of (English) country dance formations with Highland music and footwork. It has become the national ballroom dance form of Scotland, partly because "Caledonian Country Dances" became popular in upper class London Society in the decades after the rebellion of 1745.

When it first became popular around the 18th century it was as a shorter, quicker form of dance that was a light relief from the more courtly dances normally danced. Derived from early British forms of Country dancing, SCD is related to English country dancing, contra dancing, cèilidh dancing, Old time dancing and Irish set dancing due to the combination of some of these dance forms in early Country dance forms and later cross-over introduced by their overlapping influences via dancers and dance masters.

Scottish country dancing (a social form of dance with two or more couples of dancers) should not be confused with Scottish highland dance (a solo form of dance). There is a certain amount of cross-over, in that there are Scottish country dances that include highland elements as well as highland-style performance dances which use formations otherwise seen in country dances, but these are relatively few when the two dance forms are considered each as a whole.

All content from Kiddle encyclopedia articles (including the article images and facts) can be freely used under Attribution-ShareAlike license, unless stated otherwise. Cite this article:
Scottish country dance Facts for Kids. Kiddle Encyclopedia.