Irish dance or Irish dancing is a group of traditional dance forms originating from Ireland, encompassing dancing both solo and in groups, and dancing for social, competitive and performance purposes. Irish dance in its current form developed from various influences such as French quadrilles and English country dancing throughout the 18th and 19th centuries. Dance was taught by "travelling dance masters" across Ireland throughout this period, and separate dance forms developed according to regional practice and differing purposes. Irish dance became a significant part of Irish culture, particularly for Irish nationalist movements. From the early 20th century, a number of organisations promoted and codified the various forms of dance, creating competitive structures and standardised styles.

Solo Irish dance includes the most well-known form of Irish dance, Irish step dance, which was popularised from 1994 onwards by dance shows such as Riverdance, and which is practised competitively across the Irish diaspora. Step dance is characterised by the rigid upper body and intricate footwork of its performers. Other forms of solo Irish dance include sean-nós dance, a relaxed and social dance style involving improvised steps, and festival Irish dance, a style which separated from step dance in the mid-20th century.

Irish dancing in groups is made up of a number of styles and traditions, which developed from French and English dances and formations. Ceili dance, practised both competitively and socially, is performed by groups of two to sixteen people, and often uses traditional or codified dances and formations. Its footwork is simple, and emphasis is placed on the figures and formations of the dances. Set dance is primarily a social tradition, for groups of four dancers, and includes elements of the intricate footwork found in step dance.

A variety of forms of solo Irish dance have developed which are described as stepdance. These include the well-known "modern" stepdance performed competitively; old-style stepdance, which is closer in style to the dance practised by 19th-century travelling dance masters; and festival dance, which separated from modern stepdance over stylistic and administrative disputes in the mid-20th century. 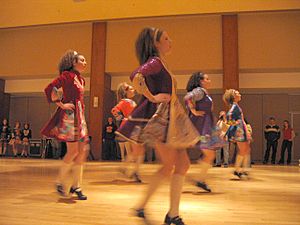 The most predominant form of Irish stepdance is that popularised by the Broadway show Riverdance, and other Irish dancing stage shows since the late 20th century. Characterised by a rigid torso and dances performed high on the balls of the feet. 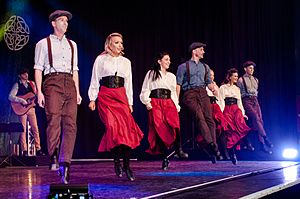 Three types of shoes are worn in competitive step dancing: hardshoes and two kinds of softshoe. The hardshoe ("heavy shoe", "jig shoe") is often mistaken for a tap shoe, but the taps on the sole of the shoe are made of wood, fiberglass, or resin, rather than of metal. The first hard shoes did have metal taps. It was common practice in the 17th and 18th century to hammer nails into the soles of a shoe in order to increase the life of the shoe. Dancers used the sounds created by the nails to create the rhythms that characterize hard shoe dancing. Later the soles were changed into resin or fiberglass to reduce the weight.

Each shoe has eight striking surfaces: the toe, bottom, and sides of the front tap and the back, bottom, and sides of the back tap (the heel). Hardshoes are made of black leather with flexible soles. Sometimes the front taps are filed off in order to enable the dancer to stand on his or her toes, rather like pointe shoes. Hardshoes are worn when dancing the hornpipe, the treble jig or "heavy jig", and the treble reel or "tap reel". The same hardshoes are worn by all dancers, regardless of gender or age.

All content from Kiddle encyclopedia articles (including the article images and facts) can be freely used under Attribution-ShareAlike license, unless stated otherwise. Cite this article:
Irish dance Facts for Kids. Kiddle Encyclopedia.