William Kempe (c. 1560–c. 1603), commonly referred to as Will Kemp, was an English actor and dancer specialising in comic roles and best known for having been one of the original players in early dramas by William Shakespeare. Roles associated with his name may include the great comic creation, Falstaff, and his contemporaries considered him the successor to the great clown of the previous generation, Richard Tarlton.

Kempe's success and influence was such that in December 1598 he was one of a core of five actor-shareholders in the Lord Chamberlain's Men alongside Shakespeare and Richard Burbage, but in a short time (possibly after a disagreement among the members of the troupe) he parted company with the group. Despite his fame as a performer and subsequent intent to continue his career, he appears to have died unregarded and in poverty circa 1603.

In a 1615 lawsuit brought by Thomasina (née Heminges) Ostler, widow of William Ostler, against her father, John Heminges, the recently deceased actor William Kempe was referred to as a gentleman (Willelmo Kempe nuper de Londonia generoso defuncto), and it has been suggested that he was a member of the Kempe family of Olantigh, a property 1 mile (1.6 km) north of Wye in Kent:

Kemp's parentage is unknown, though it has been conjectured that, despite his plebeian performance persona, he was linked in some way to the Kempes of Ollantighe, near Ashford in Kent, who were a wealthy Catholic dynasty. Sir Thomas Kempe (1517–1591) did indeed have a son named William; however, the claim that this William Kempe was the actor cannot be correct, since he was buried at Wye church on 27 March 1597 (Honneyman, 125–9; Bannerman, 3; private information, A. Findlay) . Nonetheless, this putative connection might help explain the otherwise surprising story—dramatized in the play The Travailes of the Three English Brothers (1607) by Day, Rowley, and Wilkins—that when William Kemp the actor was in Italy in 1601 he had an encounter with the celebrated traveller Sir Anthony Shirley: for Sir Anthony and his two equally famous brothers were related to the Ollantighe Kempes through their mother, who was Sir Thomas Kempe's daughter. Possibly, then, the actor had some tie of kinship to Ollantighe, at an outlying point on the family tree; or perhaps in recommending himself to Shirley he was just opportunistically taking advantage of the name he shared with Shirley's mother.

Kempe is usually given an approximate birth year of 1560. He first enters the historical record as a performer with Leicester's Men at Leicester House in May 1585 and continued in this service after Leicester's departure for the Low Countries to take part in the Eighty Years' War. Leicester's nephew, Philip Sidney, sent letters home by way of a man he called "Will, my Lord of Lester's jesting player" and it is now generally accepted this was Kempe. Sidney complained in a letter to Francis Walsingham that "Will" had delivered the letters to Lady Leicester rather than Sidney's wife, Frances Walsingham. After a brief return to England, Kempe accompanied two other future Lord Chamberlain's Men, George Bryan and Thomas Pope, to Elsinore where he entertained Frederick II of Denmark.

Kempe's whereabouts in the later 1580s are not known, but that his fame as a performer was growing during this period is indicated by Thomas Nashe's An Almond for a Parrot (1590). Nashe dedicated this work to Kempe, calling him "vicegerent general to the ghost of Dick Tarlton." Similarly, the title-page of the quarto of A Knack to Know a Knave advertises Kempe's "merriments". (Because title-pages were a means to draw attention to a book, the mention of Kempe suggests that he had become an attraction in his own right.) Critics have generally viewed the scene in which Kempe performs as rather flat (Collier, 97) and it is assumed that the scene provided a framework within which Kempe could improvise. Entries in the Stationers' Register indicate that three jigs (short comic plays) perhaps written by Kempe were published between 1591 and 1595. Two of these have survived.

By 1592 Kempe was one of Lord Strange's Men, listed in the Privy Council authorisation for that troupe to play seven miles out of London. In 1594, upon the dissolution of Strange's Men, Kempe, along with Burbage and Shakespeare, joined the Lord Chamberlain's Men and remained with that company until early 1599, when a still-unclear sequence of events removed him from the company. Although he had been a sharer in the plans to construct the Globe Theatre, he appeared in no productions in the new theatre, which was open by mid-1599, and evidence from Shakespeare's Henry V, in which there is no promised continued role for Falstaff, and Hamlet, containing its famous complaint at improvisational clowning (Act 3, Scene 2), indicates some of the circumstances in which Kempe may have been dropped. Kemp played his last role for Shakespeare in 1598. 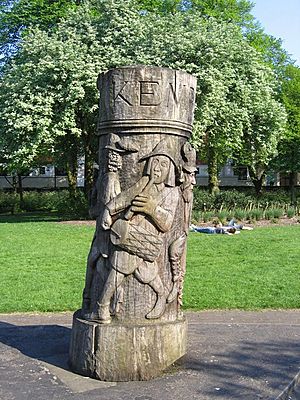 After his departure from the Chamberlain's Men in early 1599, Kempe continued to pursue his career as a performer. In February and March 1600, he undertook what he would later call his "Nine Days Wonder", in which he morris danced from London to Norwich (a distance of about 110 miles or 177 km) in a journey which took him nine days spread over several weeks, often amid cheering crowds. Later that year he published a description of the event to prove to doubters that it was true. However, his activities after this famous stunt are as obscure as his origins. On evidence from The Travels of the Three English Brothers, he is assumed to have made another European tour, perhaps reaching Italy, but by 1601 he was borrowing money from Philip Henslowe and had joined Worcester's Men. The last undoubted mention of him occurs in Henslowe's diary in late 1602.

Parish records record the death of "Kempe, a man" in St. Saviour, Southwark, late in 1603. While this is not necessarily the comedian, the record fits his departure from the documentary record.

In his time, Kempe was as famous for his stage jigs as for his acting in regular drama. The jig, a kind of rustic cousin to commedia dell'arte, featured as many as five performers in a partially improvised song-and-dance routine. Jigs had plots, often bawdy, but the emphasis was on dancing and physical comedy. Two of Kempe's jigs survive in English, and two more in German. Examples of the jigs may be seen in the manuscript collection of John Dowland (now in the Cambridge University Library). A famous 17th century jig called Kemp's Jig was named after Will Kempe and was published in the first book of John Playford's The English Dancing Master of 1651. The tune has received a number of modern renditions, including those by Jan Akkerman and Gryphon.

As an actor, Kempe is certainly associated with two roles: Dogberry in Much Ado About Nothing and Peter in Romeo and Juliet. (In the quarto text of the latter, and in both quarto and First Folio text of the former, he is identified in speech prefixes and stage directions.) From these hints, a list of Kempe's parts has been deduced which, if conjectural, is not improbable: Costard in Love's Labours Lost, Bottom in A Midsummer Night's Dream, Lancelot Gobbo in The Merchant of Venice, and Cob in Ben Jonson's Every Man in His Humour. Falstaff is a more ambiguous case. Though Falstaff presents some features of an Elizabethan dramatic clown, his character is higher in class and more complex than the other roles with which Kempe is associated.

In 2008, comedian Tim FitzHigham re-enacted Kemp's Nine Day's Wonder by Morris dancing from London to Norwich, forming the basis of his play The Bard's Fool, performed at the Edinburgh Fringe.

During the Covid-19 Lockdowns 2020-2021, Hexachordia, a Musical trio created KEMP’S JIG - a fifty-five minute “Docu-Concert” following the exploits of the Shakespearean comic actor and available to view online.

All content from Kiddle encyclopedia articles (including the article images and facts) can be freely used under Attribution-ShareAlike license, unless stated otherwise. Cite this article:
William Kempe Facts for Kids. Kiddle Encyclopedia.