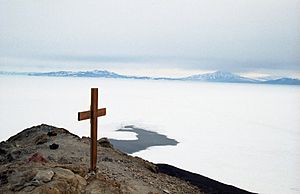 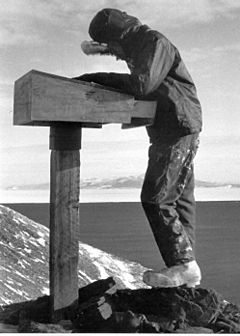 A mariner from the freighter USNS Southern Cross signs the summit registry on Observation Hill.

Observation Hill is a steep 754-foot (230 m) hill adjacent to McMurdo Station in Antarctica and commonly called "Ob Hill." It is frequently climbed to get good viewing points across the continent. Regular clear skies give excellent visibility.

Observation Hill is a lava dome and one of many volcanoes comprising the Hut Point Peninsula.

After their deaths in early 1912, the last members of Robert Falcon Scott's party were found by a search party led by the surgeon Edward L. Atkinson. The relief party took their photographic film, scientific specimens, and other materials. They had to leave Scott and his men in their tent, and later parties could not locate the campsite, since that area had been covered in snow. A century of storms and snow have covered the cairn and tent, which are now encased in the Ross Ice Shelf as it inches towards the Ross Sea. In 2001 glaciologist Charles R. Bentley estimated that the tent with the bodies was under about 75 feet (23 m) of ice and about 30 miles (48 km) from the point where they died; he speculated that in about 275 years the bodies would reach the Ross Sea, and perhaps float away inside an iceberg.

The search party returned to their base camp in McMurdo Sound to await the relief ship. After it arrived, they worked to build a memorial – a nine-foot wooden cross, inscribed with the names of the fatal party and the final line of the Alfred Tennyson poem "Ulysses", which reads "To strive, to seek, to find, and not to yield." On 22 January 1913, after a difficult two-day sledge journey, the cross was erected on the summit of Observation Hill, overlooking the camp and facing out towards the "Barrier" – the Ross Ice Shelf, on which Scott's party had died. In 1972, the cross was declared as one of the initial Historic Sites and Monuments in Antarctica by the Antarctic Treaty signatories, as HSM-20.

All content from Kiddle encyclopedia articles (including the article images and facts) can be freely used under Attribution-ShareAlike license, unless stated otherwise. Cite this article:
Observation Hill (McMurdo Station) Facts for Kids. Kiddle Encyclopedia.