Kathleen Young, Baroness Kennet, FRBS (27 March 1878 – 25 July 1947) was a British sculptor. She was the wife of Antarctic explorer Captain Robert Falcon Scott and the mother of Sir Peter Scott, the painter and ornithologist. By her second marriage, to Edward Hilton Young, she became Baroness Kennet, and mother to the writer and politician Wayland Hilton Young.

She attended St George's School, Edinburgh then the Slade School of Fine Art, London from 1900 to 1902. She then enrolled at the Académie Colarossi in Paris from 1902 to 1906 and was befriended by Auguste Rodin who introduced her to Isadora Duncan. On her return to London, she became acquainted with George Bernard Shaw, Max Beerbohm and J.M. Barrie, whose former home she later bought. 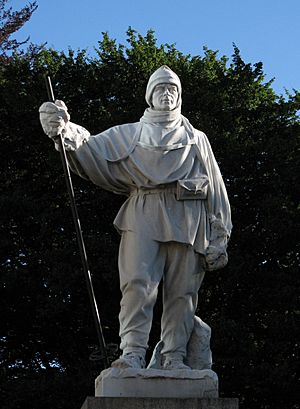 Her statue of her first husband in Christchurch, New Zealand (photographed before it was damaged in the earthquakes) 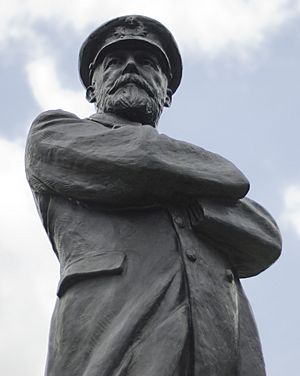 Three of Scott's busts feature in the collection of London's National Portrait Gallery, and she is also the subject of thirteen photographic portraits there. 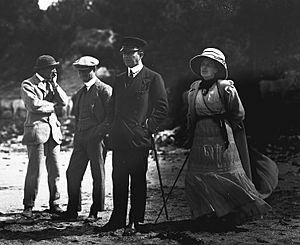 Robert Falcon Scott and Kathleen on Quail Island in Lyttelton Harbour, NZ, in 1910

She sculpted a statue of her first husband, Antarctic explorer Robert Falcon Scott, of which there are two versions: a bronze statue erected in Waterloo Place, London, in 1915 and a replica in white marble located in Christchurch, New Zealand, put up in 1917. A plaque to Scott is on the exterior of the Scott Polar Research Institute in Cambridge with a statue of "Youth" (1920), for which the model was A. W. Lawrence, younger brother of T. E. Lawrence ("Lawrence of Arabia").

Scott also sculpted a statue of Edward Smith, captain of the Titanic, after his death. This is situated in Beacon Park, Lichfield, England.

Scott statue at Oundle School entitled "Here Am I, Send Me" is erroneously believed to be modelled on Peter Scott.

Scott also produced a small bronze of the Indian actor Sabu which is now missing, after a theft.

A memorial statue of Charles Rolls by Scott stands on the promenade in Dover.

Scott also made a life-size statue of Thomas Cholmondeley, 4th Baron Delamere. It was initially situated in Nairobi, Kenya, but can now be found in the Soysambu Conservancy, near Nakuru, Kenya.

She married the Antarctic explorer Captain Robert Falcon Scott, R.N., on 2 September 1908, and a year later gave birth to their son Peter Scott, who became famous in broadcasting, ornithology, painting, conservation and sport. In 1910, she accompanied her husband to New Zealand to see him off on his journey to the South Pole. A biographer of the Norwegian explorer Fridtjof Nansen has suggested that, in her husband's absence, she began a brief affair with Nansen, the mentor of Scott's rival Amundsen. This has been refuted. In February 1913, while sailing back to New Zealand to greet Scott on his return, she learned of his death in Antarctica in March 1912.

In 1922, she married the politician Edward Hilton Young. Her second son, Wayland Hilton Young (1923–2009) was a writer and politician. Her grandchildren include Emily Young, artist, and Louisa Young, writer.

She was a member of the International Society of Sculptors, Painters and Gravers.

In 1913, she was granted the rank (but not the style) of a widow of a Knight Commander of the Order of the Bath. This meant that, for the purposes of establishing official precedence, she was treated as if she were the widow of such a knight. However, she was not entitled to be called Lady Scott merely by virtue of this, and it did not amount to Captain Scott being posthumously knighted.

When her second husband was created Baron Kennet on 15 July 1935, she gained the title Baroness Kennet.

All content from Kiddle encyclopedia articles (including the article images and facts) can be freely used under Attribution-ShareAlike license, unless stated otherwise. Cite this article:
Kathleen Scott Facts for Kids. Kiddle Encyclopedia.