Barrackpore (also known as Barrackpur) is a city. It is located in the West Bengal state of India. It is around 23 kilometres (14 mi) away from Kolkata . It is also a part of the zone covered by Kolkata Metropolitan Development Authority ( KMDA ). It is the headquarters of the Barrackpore subdivision. 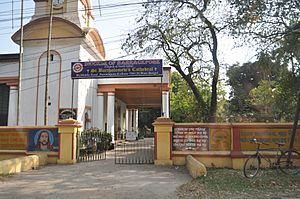 The name Barrackpore may have originated from the English word barracks. This is considering it was the site of the first cantonment of the British East India Company. Alternatively, the Ain-i-Akbari suggests that the name comes from "Barbakpur". Manasa Vijay, written by Bipradas Pipilai, refers to Barrackpore as "Chanak".

All content from Kiddle encyclopedia articles (including the article images and facts) can be freely used under Attribution-ShareAlike license, unless stated otherwise. Cite this article:
Barrackpore Facts for Kids. Kiddle Encyclopedia.