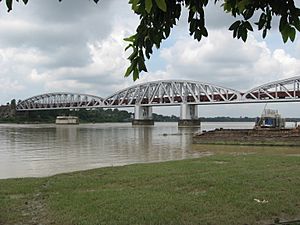 The Hooghly River Ganga is an 260 km long river. It is a distributary river of Ganges River. Farakka Barrage a dam diverts water from Ganges into a canal near the town of Tildanga of Murshidabad district. This canal supplies Hooghly river with adequate water. The river has two tributaries: the Rupnarayan River and Damodar River. Hooghly also reaches Bay of Bengal at Nurpur and then empties into the sea.

All content from Kiddle encyclopedia articles (including the article images and facts) can be freely used under Attribution-ShareAlike license, unless stated otherwise. Cite this article:
Hooghly River Facts for Kids. Kiddle Encyclopedia.