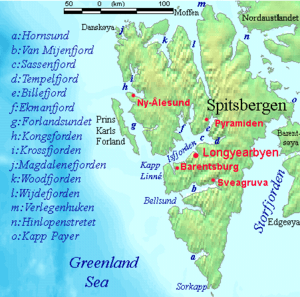 Today, it is the only island on Svalvard which is settled permanently. The island has a size of about 380 kilometres (240 mi) by 220 kilometres (140 mi)

There are only few active settlements on Spitsbergen, among them

There are several abandoned ones:

All content from Kiddle encyclopedia articles (including the article images and facts) can be freely used under Attribution-ShareAlike license, unless stated otherwise. Cite this article:
Spitsbergen Facts for Kids. Kiddle Encyclopedia.