Fridtjof Wedel-Jarlsberg Nansen (10 October 1861 – 13 May 1930) was a Norwegian explorer, historian, scientist, diplomat, humanitarian and a Nobel Peace Prize winner. From 1922 to 1927, Nansen was the League of Nations High Commissioner for Refugees.

In his youth a champion skier and ice skater, he led the team that made the first crossing of the Greenland interior in 1888, and won international fame after reaching a record northern latitude of 86°14′ during his North Pole expedition of 1893–96. Although he retired from exploration after his return to Norway, his techniques of polar travel and his innovations in equipment and clothing influenced a generation of subsequent Arctic and Antarctic expeditions. 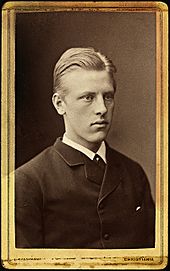 Nansen as a student in Christiania

Nansen studied zoology at the Royal Frederick University, and later worked as a curator at the Bergen Museum where his research on the central nervous system of lower marine creatures earned him a doctorate and helped establish modern theories of neurology. After 1896 his main scientific interest switched to oceanography; in the course of his research he made many scientific cruises, mainly in the North Atlantic, and contributed to the development of modern oceanographic equipment. As one of his country's leading citizens, in 1905 Nansen spoke out for the ending of Norway's union with Sweden, and was instrumental in persuading Prince Charles of Denmark to accept the throne of the newly independent Norway. Between 1906 and 1908 he served as the Norwegian representative in London, where he helped negotiate the Integrity Treaty that guaranteed Norway's independent status.

In the final decade of his life Nansen devoted himself primarily to the League of Nations, following his appointment in 1921 as the League's High Commissioner for Refugees. In 1922 he was awarded the Nobel Peace Prize for his work on behalf of the displaced victims of the First World War and related conflicts. Among the initiatives he introduced was the "Nansen passport" for stateless persons, a certificate recognised by more than 50 countries.

He worked on behalf of refugees until his sudden death from a in 1930, after which the League established the Nansen International Office for Refugees to ensure that his work continued. This office received the Nobel Peace Prize for 1938. Nansen was honoured by many nations, and his name is commemorated in numerous geographical features, particularly in the polar regions.

All content from Kiddle encyclopedia articles (including the article images and facts) can be freely used under Attribution-ShareAlike license, unless stated otherwise. Cite this article:
Fridtjof Nansen Facts for Kids. Kiddle Encyclopedia.